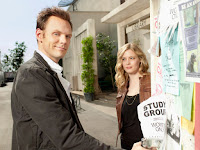 It's about time: NBC has handed out a full season order to freshman single-camera comedies Community and Parks and Recreation as well as drama series Mercy.

A source close to the production confirmed to Televisionary on Friday afternoon that Community has been picked up for a full season, bringing the episodic total this season to 22 installments.

UPDATE: Just minutes after posting the above, NBC has confirmed the full-season pickup for Community and announced additional full season orders for Parks and Recreation and Mercy, all three of of which have been extended to 22 episodes.

I couldn't be happier about the full season commitments for Community and Parks and Recreation and I tip my hat to NBC for not only taking chances with these winning comedy series but also allowing them time to grow and broaden their audiences. Best of luck and congratulations to the cast and writers on both series!

The full press release from NBC, announcing the pickups, can be found below.

UNIVERSAL CITY, Calif. ˆ October 23, 2009 ˆ NBC has picked up the comedies "Community" (Thursdays, 8-8:30 p.m. ET) and "Parks and Recreation" (Thursdays, 8:30-9 p.m. ET) -- as well as the new drama "Mercy" (Wednesdays, 8-9 p.m. ET) -- for the rest of the season by adding nine additional episodes to each, it was announced today by Angela Bromstad, President, Primetime Entertainment, NBC and Universal Media Studios.

"We are very pleased with the critical and audience reaction to our wonderful new comedy 'Community,'" said Bromstad. "The cast and producers are delivering a first-rate, quality show that is very promising as the newest of NBC's first-rate Thursday-night comedies."

About "Mercy," Bromstad added: "This drama has found a dedicated audience and continues to build in the ratings. We've seen future episodes and we're confident 'Mercy' can be a strong player for us." She continued, 'Parks and Recreation' has proven to be a steady performer for us on Thursday nights and gets better with every show. We look forward to continuing our creative collaboration with Amy Poehler, Greg Daniels, Michael Schur, and the rest of the great cast and production team."

"Community" has averaged a 2.6 rating, 5 share in adults 18-49 and 5.7 million viewers overall so far this season. Since shifting to the Thursday 8-8:30 p.m. (ET) slot on October 8, "Community" has improved the time period by 12 percent in adults 18-49 versus NBC's average in the time period earlier this season. "Community" is also one of the most upscale series on primetime broadcast television, ranking #3 in concentration of homes with $100,000-plus incomes in its adult 18-49 audience.

"Parks and Recreation" has averaged a 2.1 rating, 5 share in adults 18-49 and 4.8 million viewers overall this season. It's retained the time period's full adult 18-49 lead-in with six of six telecasts so far this season. With its most recent telecast on October 22, "Parks and Recreation" matched its highest adult 18-49 rating of the season (2.1) and hit a new season high in total viewers (4.9 million).

"Community" comes from Dan Harmon ("The Sarah Silverman Program") and Emmy Award winners Joe and Anthony Russo ("Arrested Development"). The smart comedy series concerns a band of misfits who attend Greendale Community College. At the center of the group is Jeff Winger (Joel McHale, "The Soup"), a fast-talkin' lawyer whose degree has been revoked. With some help from his fellow classmates, Winger forms a study group who eventually learn more about themselves than their course work.

Also among the series stars who comprise the group are: Chevy Chase ("Chuck") as Pierce, a man whose life experience has brought him infinite wisdom; Gillian Jacobs ("The Book of Daniel") as Britta, the 28-year-old dropout with something to prove; Yvette Nicole Brown ("Rules of Engagement") as Shirley, a sassy middle-aged divorcée; Danny Pudi ("Greek") as Abed, a pop-culture junkie; Alison Brie ("Mad Men") as Annie, a high-strung perfectionist; Donald Glover ("30 Rock") as Troy, a former high school football star trying to find his way and Ken Jeong ("The Hangover") as Spanish professor, Señor Chang.

"Mercy" is from creator/executive producer Liz Heldens (NBC's "Friday Night Lights"), executive producers Gretchen Berg & Aaron Harberts ("Pushing Daisies") and Gail Berman and Lloyd Braun. The new medical drama concerns the lives of the people who work at Mercy Hospital seen through the eyes of those who know it best ˆ its nurses.

"Mercy" is a production from BermanBraun and Universal Media Studios.

"Parks and Recreation" is a production of Deedle-Dee Productions and Universal Media Studios. Along with Daniels and Schur, Howard Klein and David Miner also serve as executive producers for the series.

OldDarth said…
Congrats to everyone involved with these shows.

Anonymous said…
Community is pretty good in a quirky way, I will watch it and the Office.

Chuck is better than all these shows and is the only thing with any real buzz that NBC has right now...so naturally it sits on the shelf until March.
10/23/2009

Anonymous said…
I'm assuming that the average for 2008-09 NBC use includes the period when Idol was on the air on Weds. As Idol hasn't actually started yet Mercy's demo and viewer totals are inflated against the 2008-09 average. Knight Rider got a 2.5 demo share at the equivalent point last season.
10/23/2009