From Across the Pond: "Spaced" 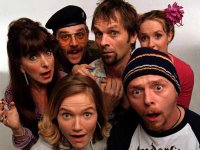 Here in the States, we've only recently embraced (to a certain extent anyway) the zany madcap nature that's found in a plentiful number of British television comedies. Shows like Arrested Development, Scrubs, Andy Richter Controls the Universe, and My Name is Earl come close to approximating that surreal humor of Britcoms like Brittas Empire, Black Books, or my latest favorite find: Spaced, a 1999 comedy that recently started its run on BBC America.

The above three shows take simple concepts that could have easily lent themselves to traditional, mundane situation comedy--man runs a leisure center (Brittas Empire), man runs a failing bookstore (Black Books), couple moves in together (Spaced)--but instead turns them on their heads, creating a topsy-turvy world for their obliviously, confused, or misanthropic characters to inhabit. The result is often pure comedy gold, the sort of thing that we Stateside are only just now beginning to experiment with, but which has been a hallmark of British comedy for some time now (check out the classic Blackadder series or Red Dwarf for more examples). And while it's taken us seven long years to be able to catch a glimpse of Spaced, it's been well worth the wait.

Created by and written by stars Simon Pegg and Jessica Stevenson (and directed by Shaun of the Dead director Edgar Wright), Spaced operates off a very simple premise that in other, less confident hands, could have turned into a formulaic sitcom. Dumped by his girlfriend Sarah (Monarch of the Glen and Hex's Anna Wilson-Jones), sad sack would-be comic artist Tim Bisley (Shaun of the Dead's Pegg) has nowhere to go, until he meets Daisy Steiner (Shaun of the Dead's Stevenson), a sad sack would-be journalist who's also temporarily homeless. After bonding over two weeks' worth of coffee, the two stumble onto a listing for a furnished flat; the only problem is that the owner will only rent it to a professional couple. So Tim and Daisy do the only thing that anyone in their situation would do: they lie.

In a brilliant extended sequence, the newly minted "couple" rundown every obscure bit of trivia they've learned about one another... all before exchanging names. Managing to woo kooky landlady Marsha Klein (Julia Deakin), they land the flat and move in together. As they settle into (fake) domesticated bliss, they're forced to keep up the pretense that they're a couple, a burden weighed even further by the biting sexual tension that exists between them. In fact, it's perfectly obvious that these two bizarro individuals are meant for one another.

Tim and Daisy's world is further complicated by a series of odd friends and acquaintances. Tim's best friend Mike(Shaun of the Dead's Nick Frost) is an obsessive gun nut who brings a pistol to their housewarming party "for security"; Daisy's catty best friend Twist (Katy Carmichael) claims to work in fashion but the closest she comes is her job in a dry cleaners. Meanwhile, landlady Marsha (Deakin) is a single mum who can talk for hours about her deadbeat ex-husband who chose his dog over her, while neighbor Brian (Mark Heap) is a freakish and paranoid artist/potential serial killer with a penchant for walking around in the nude and a history with/intense fear of Marsha.

The first two episodes (which aired last week) were a perfect introduction to that off-kilter world of Tim and Daisy's, a world in which visual gags are not only extended but also fiendishly intricate, like the hilarious Scooby Doo gag in which Tim and Daisy claim to have always pretended to be Fred and Daphne but are instead the spitting image of Shaggy and Velma (seriously). It's a world in which Daisy can plod away at her typewriter, seemingly writing a novel, when only two and a half minutes have gone by. One in which Daisy thinks that everyone, from Tim to her paperboy, is offering her drugs... or where a pair of terrifying twin girls cleans the flat's cupboards and speaks in a haunting and monotone unison. (Trust me, they're creepy, a fact that director Edgar Wright plays up in true horror movie style.)

Quick cutaways, fantasy sequences, flashbacks, and elaborate title cards are the buzzwords of this show, yet it never feels as though Spaced has sacrificed story for too many bells and whistles. Instead, the elaborate shots, Gen X homages, and quirky encounters speed by at a hilarious and fast-paced click. The series is deftly anchored by writer-stars Simon Pegg and Jessica Stevenson, whose easy rapport and quick wit is instantly evidenced. Tim and Daisy may be wacky, but they're instantly likeable and relatable. While you might not want to move in with them, everyone can either associate with them or has a Tim or Daisy in their life. And given the state of the world right now, it's rather comforting to see other twentysomethings struggle for their dreams. Tim dreams of being a comic book artist but the cloest he's come is a homemade comic called "The Bear" about a mutated teenager and a job at a local comics shop, run by Black Books' Bill Bailey. Daisy dreams of being a journalist and being surrounded by "media types," but instead she's.... actually, I'm still not entirely sure what Daisy does.

Each episode instantly leaves you wanting more and, unfortunately, after sucking me in with two back-to-back episodes last week, BBC America is now only airing one episode of Spaced a week. But I figure that if I waited seven years to see this hilarious and surreal comedy, I can wait another week to get my next fix.

See above. It's another episode of the wacky 1999 Britcom starring Shaun of the Dead's Simon Pegg and Jessica Stevenson. On tonight's episode ("Art"), Daisy's world is turned upside down when she goes on a job interview.

One of my favorite single-camera British comedies returns Stateside for a second season of twisted and bizarre episodes. Peep Show charts the daily lives of dysfunctional losers Mark and Jeremy from both of their POVs, including every drunken rambling and sick, sick occurrence. On tonight's episode, Mark believes that true love means hacking into would-be lover Sophie's email account, while Jeremy deals with an American girlfriend (guest star Rachel Blanchard). It's funny and it's so sick at times that you may just need to take a shower afterwards.

BBC America continues its reairing of the second season of the brilliant Britcom Black Books, which stars Dylan Moran and Bill Bailey. In tonight's episode ("Fever"), Bernard needs a girlfriend, while Fran experiences insomnia from the heat wave. Just trust me and watch it, you'll thank me in the morning.

Anonymous said…
I'm a huge "Shaun of the Dead" fan and was so happy to come across the lovely, insane Brit comedy "Spaced." The cast is great and the off-kilter humor is pitch perfect. I'm so glad that BBC America decided to air it!
6/30/2006

Anonymous said…
That sounds like a lot of fun. I will have to check it out. I loved Shaun of the Dead.