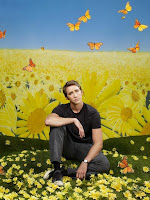 Fans of Pushing Daisies, Dirty Sexy Money, and Eli Stone shouldn't hold their collective breath waiting for ABC to run the remaining episodes of their favorite series, all of which the Alphabet cancelled last year.

"I wish that we had been able to give the producers really series-ending notice to some extent so they could really get that done and really have kind of a finale, if you will," said McPherson. "Because of the way the timing worked out, we didn't, and we weren't able to. But I'd love to find a way to get those out, because Pushing Daisies and Dirty Sexy Money for me -- most of the time when shows don't work, you can really, in hindsight, look back and kick yourself and say, 'I should have seen that.'"

Still, ABC did not announce any scheduling of those remaining episodes today and McPherson pointed to a number of obstacles standing in there way from airing those installments, including the preciousness of "real estate on air," especially in these economically uncertain times, rights clearance issues, and just scheduling dilemmas.

So, would McPherson have done anything differently coming out of the writers strike in regard to these series? Would he have brought them back in the spring rather than attempt to "relaunch" them in the fall?

"It wasn’t like there were a lot of options," said McPherson, who said that they could have "maybe gotten two or three episodes of the Wednesday night shows back on the air in the spring... So we made the gamble. Hindsight is 20/20. People did not come back to them the way we hoped. I don’t know that we had a better option. But I wished the strike didn’t happen because we are all trying to recover."

As for Pushing Daisies, McPherson didn't really have any answer about why the series underperformed on ABC. "You could look back and maybe say, okay, Pushing Daisies was a little bit too much this or that, but [Daisies, Dirty Sexy Money, and Eli Stone] are great shows. There may be something out there in terms of the way we promote these shows, the way we deliver these shows, and the way that the viewership is actually counted. I think that there's a tremendous amount of viewership that nobody, no network gets credit for. And hopefully, if we can get those viewers and get them counted for, we can keep great shows like that on the air."

Susania said…
Well that was a lot of Nothing from ABC... which is what we can probably expect in the way of programming for some time to come from them.
1/16/2009

Anonymous said…
"I would like to air the end of those shows. I wished we could have given those producers really serious series ending notice... [but] because of the way timing worked out, we didn’t."

Anonymous said…
Seems pretty reasonable. Barely anyone watched, and the watchers DVR'd it and cut out the commercials.

What was ABC supposed to do? Finance the shows for 7 years and stay in the red? Are they now to give the fans instant gratification despite legal issues, guild issues, etc.?

I'm not a shill, but I think ABC has been a relatively good studio. They negotiated a deal to creatively end Lost, which is a cash cow. The saved Scrubs to let it end respectfully. They may save King of the Hill. They put all of their screened episodes online, for the benefit of fans. There's no reason to believe they're disrespecting Pushing Daisies, DSM and Eli Stone.
1/18/2009

Unknown said…
I respectfully disagree. Just because they've done the right thing for the shows that make them tons of money, doesn't mean they're treating the "losers" correctly.

I'm not asking ABC to continue producing the series. (That would be financially irresponsible.) I'd just like them to air the eps they have in the can already. At the very least, they could post them online.
1/19/2009

I_HATE_ABC said…
I am ABSOLUTLY DISGUSTED with ABC right now, and by the looks of it, will be forever more.

For the past five weeks i have been frantically searching the t.v. guide for my three favorite, adn basically only shows that I watch. Pushing Daisies, Eli Stone, and Dirty Sexy Money, only t find out that they've been, (dear God i can barely type the word) cancelled! I find it highly unbelievable that they didn't have enough viewers to stay on the air.

I only have to say that ABC made a colosal mistake. I have a large family, and based on our love for these shows, we'll be holding grudgs for a very long time. ABC has just lost a large number of viewers. I can only hope that any other die hard fans out there will do the same. Thank God that Lost is back on the air, or i would have no reason to watch t.v. at all.

I end letting who ever made the idiotic decision to do this know that they make me sick.
1/28/2009