Channel Surfing: Harmon Ponders "Samantha Who." ABC Stirs Up Cauldron for "Eastwick," Margulies Scrubs in at "ER," and More 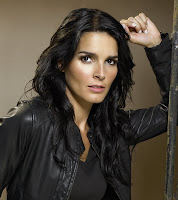 Welcome to your Friday morning television briefing. I'm super-excited for the weekend to be here after a hectic week and thrilled that we have a brand-new episode of Battlestar Galactica to head us into the weekend.

Angie Harmon (Women's Murder Club) has been cast in a potential recurring role on ABC's Samantha Who?, where she will play Gigi, "the infamous (and crazy) ex-wife of Sam's current honey, Funk (Billy Zane)." Entertainment Weekly's Michael Ausiello also alludes to the fact that Gigi plays a "critical role in the show's mythology." Hmmm... Could it be that Sam is learning just what caused her amnesia after all? (Entertainment Weekly's Ausiello Files)

ABC has handed out a pilot order to Eastwick, loosely based on the 1987 film The Witches of Eastwick, about three women who receive magical powers after a stranger visits their small town. Project, from Warner Bros. Television, will be written by Maggie Friedman. (Hollywood Reporter)

Elsewhere, NBC has given a pilot order to medical dramedy Mercy, about the professional and personal lives of three nurses who are best friends. Liz Heldens (Friday Night Lights) is attached as writer/executive producer on the Universal Media Studios-produced project. The Peacock is also said to be close to ordering pilots for Dario Scardapane medical drama Trauma and an untitled project from Jesse Alexander. (Variety, Hollywood Reporter)

Following yesterday's early ratings return in which Lie to Me bested the first hour of Lost's two-hour season premiere, the numbers have flipped, with Lost now taking the top spot over Lie to Me with one-tenth of a rating point. The number for Lie to Me reflect the highest-rated series launch this season, though the series did lose thirteen percent of its rating during the hour. (Hollywood Reporter's The Live Feed)

In addition to yesterday's news that George Clooney will scrub in as Dr. Doug Ross on ER, former cast member Julianna Margulies is also expected to return before the series ends its run after fifteen seasons. Both actors are said to be filming their scenes this week. (TV Guide, Variety)

Michelle Ryan (Bionic Woman) has been cast in the Doctor Who Easter Special, entitled "Planet of the Dead," opposite David Tennant. (Televisionary)

As predicted a few weeks back, ABC has announced a corporate restructure, under which Steve McPherson will oversee the ABC Entertainment Group, a newly created division that will merge both the network and ABC Studios into a single entity. The Alphabet was quick to say that there will be no immediate layoffs and McPherson will take some time to assemble the staff for the merged units. Former ABC Studios president Mark Pedowitz will be shifted into a new role as a senior adviser to Anne Sweeney. (Variety)

Trying to find your 3-D glasses for NBC's February 2nd 3-D episode of Chuck? Maureen Ryan has the details about where to pick up said glasses (though if you don't find them, fret not as the transmission will appear 2-D as well) and details about the episode, which guest stars Lost's Dominic Monaghan. (Chicago Tribune's The Watcher)

Michael Irvin will host an untitled reality competition series at Spike, which will have six aspiring NFL receivers and defensive backs compete for an opportunity to attend the Dallas Cowboy's training camp. Series, produced by 3 Ball Prods., is expected to air sometime this spring. (Variety)

Lost executive producers Damon Lindelof and Carlton Cuse have offered the pilot of downed US Airways Flight 1549, Chesley "Sully" Sullenberger, an open invitation to visit the set of Lost, after he managed to land his plane in the Hudson River without any fatalities. "It's funny," said Cuse, "because there's a special feature which has somebody trying to debunk the Oceanic 6's story" about surviving the plunge of Flight 815. There's this aviation expert basically saying, 'A water landing is impossible. That part of their story doesn't hold up. You could never land a plane on the water.'" (TV Guide)

Lifetime has ordered twenty half-hour episodes of nonfiction series Cook Yourself Thin, in which food experts Harry Eastwood, Allison Fishman, and Candice Kumai show viewers how to cut fat and calories out of unhealthy meals. Series is expected to debut this spring. (Variety)

Anonymous said…
I've missed "Chuck" and can't wait for the 3-D episode which should be really fun...especially with guest star Dominic Monaghan. And thanks for the tip on where to find the 3-D glasses!
1/23/2009