(No) Sex and the City: Liz Heads to the Brooklyn Bridge on "30 Rock" 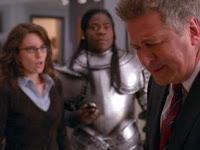 Ah, 30 Rock, I've missed you. There really is nothing better than to head into the weekend with the zany antics of the TGS crew.

This week's episode of 30 Rock ("Senor Macho Solo"), the first of 2009, was no exception, as the plot careened from character to character, with all of our leads getting equal weight.

Let's see: Liz mistakenly went on a date with Stuart (guest star Peter Dinklage) after thinking he was a child and ruffling his hair; Tracy tried to get his wife Angie to sign a post-nup agreement but ended up getting it on everywhere from Jack's desk to the, well, hallway; Jenna tried to audition for the role of Janis Joplin in a new Sheinhardt-Universal produced biopic; and Jack discovered a lump on his testicle and fell in love with his mother's nurse Elisa (guest star Salma Hayek).

All this, plus a fantastic allusion to the recent Sex and the City movie that had Liz and Stuart agree to meet up on the Brooklyn Bridge. What more could you want?

I was glad to see that the writers haven't dropped the Liz adoption storyline and that babies are still very much on the mind of our beloved Ms. Lemon (after all, she's stealing babies' shoes left and right) and that--in true Liz Lemon fashion--she not only told a baby girl to follow the gender inside of her and unwittingly agreed to go out on a date with Stuart ("what?") after she ruffled his hair outside Radio City Music Hall. Rather than admit that she believed he was a child from behind, Liz finds herself dating the UN delegate as part of a mommy complex. (The way she pulled him back from the "fire" was hysterical.)

The Jack cancer scare could have been mawkish on another series but here it served a narrative purpose: to get the "senor macho solo" Jack to admit that he didn't want to die alone and that his original plan to die involved "a McFlurry machine and a video tape of risqué commercials from overseas" may have been an oversight. This quickly pushes him into the arms of Elisa, who between drying off Colleen and hosting her niece's quinceanera, has also fallen for her employer's charms.

What worked for me? Liz and Jenna's baby conversation in which Jenna admitted she was sleepy; Liz saying "cat sound" instead of, well, making one; the solid gold shoes and money suits; Jenna as Janis Joplin getting freaked out by the "iron birds" in the sky; the post-nup calling for Angie to get $8500 if Tracey leaves her for the "chunky chick from Hairspray"; Stuart living under a bridge; the picture of Jenna on a windy day on Access Hollywood; Elisa admitting that "authoritative rapid Spanish subdues white people" including both Colleen and Jack; Jack ordering "a cup of hot water with a chicken bone in it and a bowl of salted ice cubes" for his date rather than the Tasting Menu; Kenneth performing "Top That" from Teen Witch; Liz and Stuart both showing up on the Brooklyn Bridge, just like Miranda and Steve. (Really, I could go on and on.)

The weakest element of the episode, I felt, was the Tracy-Angie storyline but I'm willing to overlook it as it helped spur Jack into Elisa's arms by the end of the episode. Also, the positive/negative lab results gag with Tracy has been done to death already but these were minor quibbles about yet another hilarious and quotable episode of 30 Rock.

Best line of the evening: "You can’t fight synergy, Lemon. It’s bigger than all of us." - Jack

Next week on 30 Rock ("Flu Shot"), Liz tries not to catch the flu; Jack is being selective about which crew members get to receive vaccinations from Dr. Spaceman (guest star Chris Parnell); Liz refuses a flu shot, championing for the rights of the crew; Jack is forced to get creative in order to spend time with Elisa (guest star Salma Hayek) as she is working seven days a week.

Anonymous said…
Both Peter Dinklage and Salma Hayek were great on the show. I loved the Liz/Stuart storyline and Liz's kid obsession. No other show has tackled the "biological clock (or, in Liz's case, "biological time bomb") as hilariously as 30 Rock.
1/09/2009

par3182 said…
babies are still very much on the mind of our beloved Ms. Lemon (after all, she's stealing babies' shoes left and right)

The CineManiac said…
Finally got to watch this as NBC bumped it here for some basketball game, ugh! Then they broadcast it in SD, BOO!!!

But it was still a hilarious episode. Loved Dinklage and how Liz met him. Also loved the "Cat Sound" and "Top That" (especially since I just watched it in October for the first time since my wife used to watch it all the time) First the Teen Witch herself is on this episode, then this song, Awesome!
1/12/2009