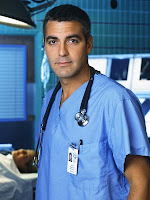 Welcome to your Thursday morning television briefing. I'm sure many of us didn't get a very good night's sleep after the last night brought us the two-hour premiere of Lost, new installments of Damages and Top Chef, and the launch of FOX's Lie to Me. Since when did Wednesday become the go-to night for top-notch television programming?

George Clooney is filming scenes this week on NBC's ER, where he will reprise his role as Dr. Doug Ross. He last appeared on the series in an uncredited cameo in 2000. No word on whether he'll bring Ross' Caesar cut with him. (Entertainment Tonight)

Season Two of HBO's Flight of the Conchords has lined up a host of intriguing guest stars including Saturday Night Live's Kristin Wiig, My Boys' Jim Gaffigan, and Lost's Alan Dale. Also of note: Michel Gondry (Eternal Sunshine of the Spotless Mind) directed the February 15th episode, in which Jemaine dates an Australian (shock horror!). (Chicago Tribune's The Watcher)

Patti LuPone has been cast in an upcoming episode of NBC's 30 Rock, where she will play the mother of TGS staffer Frank. (Yes, really, Frank.) Lupone was most recently seen on the small screen on ABC's Ugly Betty, where she played the mother of Michael Urie's Marc. (Entertainment Weekly's Ausiello Files)

ABC is keeping Samantha Who? benched until this spring; the comedy series was originally supposed to return on January 12th but the timeslot will now be filled by two-hour editions of reality series The Bachelor through its entire run, concluding March 2nd, and by two-hour editions of Dancing With the Stars to air March 9th, March 16th, and March 23rd. (Futon Critic)

NBC is said to be considering a sequel or potential primetime spin-off of Sunday night's miniseries The Last Templar. Should the Peacock order a sequel to the four-hour mini--which stars Scott Foley and Mira Sorvino, it would be set in India. (Hollywood Reporter)

UK network Sky1 has acquired exclusive free and basic TV rights plus non-exclusive VOD and download-to-own rights to FOX's Lie to Me, which launched Stateside last night. Sky1 plans to launch the series in the spring. (Variety)

Hilary Duff has been cast in an upcoming episode of CBS' Ghost Whisperer, where she will play a mysterious woman who may have been involved in a man's death. (Entertainment Weekly's Ausiello Files)

USA has pushed the launch of Season Eight of Law & Order: Criminal Intent once again, this time until this summer. Season Eight, featuring Jeff Goldblum as Detective Zach Nichols (taking over for Chris Noth), was originally to launch in November 2008, three months after the end of the seventh season; in both cases, the explanation given was the cabler's wish to air all sixteen episodes of Season Eight in a row. (TV Guide)

NBC has hired outside marketing firm Naked Communications to revamp its brand. "We're thinking about how we market the brand, how we present ourselves to the advertising community at upfront and how we present ourselves to the consumer," said Adam Stotsky, president of entertainment marketing at NBC. "Naked is working with us to sharpen our image, (as we) look for a fresh perspective on how we go to market." (Variety)

Reality television employees have settled a class action suit against FOX, CBS, ABC, and several production companies including Rocket Science Laboratories to the tune of more than $4 million dollars. The action, filed in 2005, alleged that the defendants violated wage and hour laws by underpaying story department employees and failed to provide meal periods or maintain accurate payroll records. (Variety)

Anonymous said…
Argh. There's too much on Wednesday nights now with Lost, Damages, and Top Chef! I really wish they at least would have scheduled Lost and Damages on two separate nights. They are two of my favorite shows but it's tough watching both in one evening. Too much drama!
1/22/2009

Anonymous said…
I love Kristin Wiig and can't wait to see her on Conchords. And I think it's fantastic that Michel Gondry directed an episode!
1/22/2009