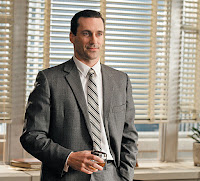 The first appearance of Mad Men's Jon Hamm on NBC's 30 Rock is slated for February 5th. As previously reported, Hamm will join the cast of 30 Rock in a three-episode arc where he will play a new love interest for Liz Lemon (Tina Fey). Let's just hope their relationship goes a lot smoother than Don and Betty Drapers, huh? (The Chicago Tribune's The Watcher)

Holy British format import! HBO, Warner Bros TV, and writer/executive producer John Wells (ER) are developing a US version of Channel 4's Shameless, created by Paul Abbott (State of Play). Series follows the lives of the members of the rough-and-tumble Gallagher clan, headed up by lovable alcoholic/drug addict patriarch Frank, living on a public housing estate in Manchester. The sixth season of Shameless launches in the UK later this month; Season Seven is slated to air in 2010. (Variety)

NBC has ordered a script for one-hour music drama pilot Soundtrack from writer Jared Bush (Still Standing). Project, from Universal Media Studios and Mosaic TV, will follow the life of a man whose day-to-day interactions are accompanied by the music in his head, which begins after he loses his job and his ex-girlfriend gets engaged. (Variety)

Cabler TNT is said to be close to making decisions on which pilots will be handed series orders, with one or two getting the greenlight. Men of a Certain Age, created by and starring Ray Romano, is said to be a top contender. Also in the running: Jerry Bruckheimer's cop drama The Line, starring Dylan McDermott, and medical drama Time Heals, starring Jada Pinkett Smith. (Variety)

TLC has given a series order to docusoap NASCAR Wives, following the lives of women who are married to famous NASCAR racing legends. Cabler will air a one-hour special of the series on January 24th, will a full season to follow in the spring. (Hollywood Reporter)

Lifetime has allegedly pulled the plug on The Amazing Mrs. Novak. The pilot of the US version of British mini The Amazing Mrs. Pritchard, which starred Amy Pietz and Kristin Dattilo, will not be ordered to series. Among the purported reasons for opting not to hand out a series order: John McCain and Sarah Palin's failed presidential bid and the scandal involving Illinois governor Rod Blagojivich. Governors are, apparently, personae non grata right now. (Variety)

Wes Chatham (Barbershop: The Series) has joined the cast of CBS' The Unit in a recurring role; he'll play Sam, a new recruit to the team who also happens to be its youngest member. Chatham's first episode is slated to air in March and it's said that Chatham will "find himself at the center of an intense Bourne/Bond-style action sequence." (Entertainment Weekly's Ausiello Files)

Macrovision has agreed to sell its TV Guide assets--including the TV Guide Network and TVGuide.com--to Lionsgate for $255 million. Deal is likely to close by February 28th. (USA Today)

Danielle C.F. Maris said…
I'm really looking forward to seeing Jon Hamm on 30 Rock and seeing what he can do in a comedic environment!
1/06/2009