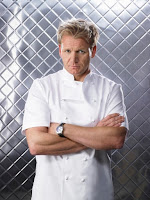 Welcome to your Thursday morning television briefing. I hope everyone is recovering from some truly fantastic installments of ABC's Lost and FX's Damages last night.

FOX has announced that it will air at least one live special with enfant terrible chef Gordon Ramsay, in which he teaches viewers at home how to make a three-course meal alongside him. Network will likely air the special, based on Ramsay's UK series Cook Along and part of Ramsay's overall deal with the network, in late spring or early fall. "My frustration is that most cooking shows don't really cook," said Ramsay. "Their ingredients are prepped earlier, that's not cooking... it's nice to show the journey from live ingredient to (finished meal)." (Hollywood Reporter)

Michael Shannon (Revolutionary Road) has been cast as the lead in Terrence Winter and Martin Scorsese's HBO pilot Boardwalk Empire, where he will play Van Alden, a senior Treasury agent tasked with stamping out bootlegging in Prohibition era Atlantic City. Also cast: Vincent Piazza (The Sopranos), who will play a young Lucky Luciano. (Hollywood Reporter)

NBC has ordered a pilot for one-hour dramedy Parenthood, based on the film of the same name, which will be adapted by Jason Katims (Friday Night Lights). Katims will executive produce the Universal Media Studios project, along with Imagine's Brian Grazer and Ron Howard. Move marks the second time that Parenthood has been adapted for television; first was for a 12-episode series in the 1990s on which Joss Whedon was a staff writer. (Variety)

Billy Campbell (The 4400) will star in NBC dramedy Lost in the '80s, from Sony Pictures Television, about the suburban Mobley family as they deal with the ups and downs of life in the Reagan era. (Hollywood Reporter)

Ellen Barkin will star in an untitled comedy pilot for HBO about a woman who divorces her high-profile husband and returns to the dating scene, where she forms a "close, platonic bond with the 24-year-old son of her ex-husband." Script will be written by Shauna Cross (Whip It!) and the deal marks the first television series for Barkin. (Variety)

SAG representatives will meet with the AMPTP next week in order to resume contract negotiations. Talks will take place on Tuesday and Wednesday at the AMPTP's headquarters in Sherman Oaks; neither side would comment about the meeting. (TV Week)

ABC is said to be in talks to pick up Media Rights Capital's 13-episode comedy series Surviving Suburbia, starring Bob Saget, Cynthia Stevenson, Jared Kusnitz, G Hannelius, Jere Burns, and Lorna Scott, which was to air on MRC's Sunday night CW block beginning in March before the CW ended its deal with MRC in November. (Variety)

Anonymous said…
I'm interested in seeing Gordon Ramsay's live special and completely agree with him that most cooking shows are not realistic because the ingredients are already prepped. I would have a much easier time preparing a meal if all of the ingredients were perfectly chopped and diced and put out in a neat row of little bowls for me!
1/29/2009