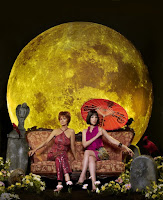 Still no word on when--if ever--ABC will air the three remaining installments of Pushing Daisies. "They are not scheduled to air right now," creator Bryan Fuller told Entertainment Weekly's Michael Ausiello, "and that's all we know." Rest assured, I'm also trying to get to the bottom of this. (Entertainment Weekly's Ausiello Files)

The Futon Critic's Brian Ford Sullivan has a new interview with Joss Whedon about his upcoming FOX drama Dollhouse and Dr. Horrible, in which Whedon discusses the lure of television, the genesis of Dollhouse (over lunch with Eliza Dushku), and ditching the original pilot. "This won't be the second episode because this isn't what the network wants, this isn't the kind of show they want," says Whedon. "This is something you could do two years in when everybody's familiar with it and you don't have to explain it. I always hold to the premise that the first six episodes are the first six pilots. You have to be able to come in and just go, "Oh, okay. So that's the premise and here it is delivered in this fashion." And I did get a little turned around. There was times when I was like, wait a minute, are the things that I care about still in the show? [Laughs.] Because some things that I was interested in - the more twisted elements of the human psyche and some of the more quieter aspects of it, kind of got shunned to the side." (Futon Critic)

NBC and Warner Bros. Television have allegedly failed to reach a financial agreement on John Wells' latest project, Police (formerly known as LAPD). With ER wrapping up its 15-season run early this year and NBC eliminating the 10 pm weeknight timeslot (it will go to Jay Leno's new nightly talkshow), it appears that the writing was on the wall for Wells' latest. However, some say it's an end of an era as Wells bids adieu to NBC, home of not only ER but also Wells' The West Wing and Third Watch, among others. NBC, for their part, claims the deal is not dead. (Los Angeles Times)

CBS will swap out freshman comedy Worst Week, which wraps its run on February 9th, for the return of Rules of Engagement. No news on the fate of Worst Week, which has yet to be renewed for a second season. More likely to receive a renewal: fellow frosh comedy Gary Unmarried. (Hollywood Reporter's The Live Feed)

Showtime and executive producer Richard LaGravenese (The Bridges of Madison County) are developing a one-hour drama about a suburban couple who try to reinvigorate their relationship by having open marriage. LaGravenese will write the script and is attached to direct, should the project be ordered to pilot. (Variety)

Pay cabler HBO is developing one-hour drama Stud, set in the rarefied world of horse breeding, with Dexter writer James Manos attached to write and executive produce. Project, based on a non-fiction book by Kevin Conley and produced by Half-Shell, will look at the relationships among a family of horse breeders and tackle such diverse topics ranging from "immigration to relationships to performance-enhancing drugs as the family seeks to find the perfect breeding combinations." (Hollywood Reporter)

ABC has ordered six episodes of celebrity sports reality competition franchise Superstars (last seen in the US in 2002), in which eight male and female pro athletes will be paired with eight celebrities to compete in various sporting challenges including swimming, kayaking, and biking, with teams to be eliminated each week. Series, from Juma Entertainment and Blue Entertainment Sports TV, is expected to air this summer. (Variety)

Well, The Janitor is still getting work. Scrubs' Neil Flynn will star opposite Patricia Heaton in ABC's comedy pilot The Middle, where he will play the male half of a married Midwestern couple who cope with the highs and lows of raising three kids. (Hollywood Reporter)

TV Guide has some scoop on what to expect when Greek returns to ABC Family on March 30th at 8 pm, including guest turns by Ken Marino (Veronica Mars) and new cast members Jesse McCartney and Andrew West. (TV Guide)

Kate French (The L Word) will guest star on Gossip Girl as Elle, "a mysterious nanny who comes to town and gets involved with Ed Westwick’s Chuck Bass." (OK!)

SAG has told its members to continue working under its basic cable pact, despite the deal having expired three weeks ago. The guild has set to set a start date for negotiations with roughly 20 cable companies for their cable deal, which covers such series as The Closer and Monk. (Variety)

Sony has promoted Glenn Adilman and Sharon Hall to EVP of comedy and drama development respectively; both signed new multi-year deals with the studio. (Hollywood Reporter)

Anonymous said…
That Whedon interview sounds pretty disheartening. Makes it seem like Joss has already given up on the Dollhouse too.
1/07/2009