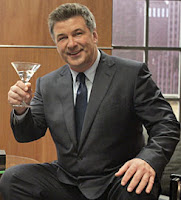 By the hammer of Thor! Good news for fans of 30 Rock and The Office: NBC has renewed both series for the 2009-10 season, which means that we're guaranteed a fourth and sixth respective season of each. Given 30 Rock's comedy win at this week's Golden Globes (and well-deserved statuettes for stars Tina Fey and Alec Baldwin), I would have been gobsmacked if NBC hadn't ordered an additional season of the critically beloved series. (press release)

Unfortunately, there's no news of the fate of ratings-challenged but critically loved NBC series Chuck and Life, which weren't mentioned in NBC's renewal announcement (which also included another season of The Biggest Loser).

And there's even worse news for fans of ABC's Pushing Daisies, Dirty Sexy Money, and Eli Stone. According to Kristin dos Santos' sources, the Alphabet won't be airing the remaining episodes of either series until June at the earliest. (E! Online's Watch with Kristin)

Bryan Fuller is said to be contemplating a feature film version of Pushing Daisies but as co-star Kristin Chenoweth, recently cast in NBC pilot Legally Mad, told me and several other reporters on Tuesday, Fuller would only do it if all six of the series' leads signed on... and they are prepared to do so! "I'm sure that Bryan Fuller wouldn't do it without the six main characters," said Chenoweth. "Paul Reubens was a big part of it and we have certain guest stars that are standouts that we'd want back. But he has such a great idea for it [and] we all want to [do it]."

Scott Bakula (Enterprise) has been cast in Chuck as Chuck and Ellie Bartowski's estranged father; he'll first appear in an episode slated to air in April. "Chuck made a promise to his sister, Ellie, that he was going to find their dad in time for her wedding," co-creator Josh Schwartz told Michael Ausiello. "And it's something that Chuck becomes consumed with pursuing during the second half of the season. But when he finds him, he's not necessarily a guy who wants to be found. He's living in a trailer, he's disheveled, he's paranoid and he's claiming constantly that Ted Roark [Chevy Chase] -- who he used to work with -- stole all his ideas from him. And Ted Roark has now become this super-successful software billionaire, and Chuck's dad has become an eccentric, living in the shadows."(Entertainment Weekly's Ausiello Files)

Hugh Bonneville (Bonekickers) has been cast in NBC dramedy pilot Legally Mad, opposite Charity Wakefield and Kristin Chenoweth. Bonneville will play Gordon Hamm, a partner at the law firm and the father of Brady (Wakefield) who is going through a bit of a midlife crisis. (Hollywood Reporter)

Meanwhile, that spin-off of The Office (not to be confused with the untitled Amy Poehler/Greg Daniels comedy) could still be in the works. "It's not possible, physically, for me to be involved in it right this second, but I'm talking to people over at The Office about another idea, and [The Office's British creator] Stephen Merchant came back and directed an episode of The Office so were were talking about the idea," said Greg Daniels at yesterday's TCA panel. "It's possible that some combination of other Office people could produce it without my giving blood for it." (Entertainment Weekly's Hollywood Insider)

Greg Daniels says that he wants Amy Ryan to return to NBC's The Office as Holly Flax. Ryan will hopefully appear in the season finale of The Office and could return next season as well. "She will come back," Daniels told Michael Ausiello. "We haven't written it yet, but we're discussing her coming back for the season finale. We're hoping she'll be available... Because [Michael and Holly] have such a deep connection, I don't think she can blow in and out every so often. It would be too hard for him as a human being. So, we're hoping to find some very significant things for them. And if we can get her to sign on for a really long period, we'll do it." (Entertainment Weekly's Ausiello Files)

And, finally, Lipstick Jungle isn't quite dead just yet. "We officially have not canceled Lipstick Jungle," said Universal Media Studios' Angela Bromstad. "I think there are alternatives we may look into. It's all a conversation for the fall." (TV Guide)

Lifetime has ordered twelve episodes of dramedy Drop Dead Diva, about a wannabe model who, after a fatal car accident, is reincarnated in the body of an overweight lawyer. Project, starring Brooke Elliott and from writer/executive producer Josh Berman (Bones), will launch this summer. (Hollywood Reporter)

Josh Hopkins (Swingtown) has been cast in a multiple-episode story arc on ABC's Private Practice, where he'll play a surgeon with whom Addison strikes up a flirtation... or, well, more than a flirtation in five episodes this spring. (Entertainment Weekly's Ausiello Files)

CBS has given a cast-contingent pilot order to comedy Tick Tock, about a 30-something single mom who attempts to focus her attention on finding love. Project, from writer/executive producer Bill Kunstler (The War at Home), will be produced by CBS Paramount Network Television. (Variety)

Christine Baranski (Mamma Mia!) has been cast in at least one episode of CBS' The Big Bang Theory, where she will play Dr. Beverly Hofstadter, Leonard's mother and an acclaimed brain researcher. (TV Guide)

Ugly Betty's David Blue has been cast in Sci Fi's Stargate Universe, the latest iteration in the franchise, opposite Robert Carlyle. Blue will play "Eli Wallace, a total slacker who just happens to be an utter genius with anything he puts his mind to -- mathematics, computers, video games. A lack confidence has left him with an acerbic sense of humor." (Entertainment Weekly's Ausiello Files)

Grant Show is said to be open to returning to the new iterations of either of his old haunts, namely 90210 or Melrose Place. But he does have one condition: he wants to rekindle his short romance with Jennie Garth's Kelly Taylor. "“That would be the only angle that would be really interesting,” said Show. “They never really explored that in enough depth.” (E! Online)

Anonymous said…
NBC must be waiting to see what CHUCK's ratings will be after the Super Bowl episode.

If NBC doesn't bring CHUCK back for season 3 NBC is the "Biggest Loser!" NBC will lose me a viewer for All of their other shows!

I love that Bakula will be playing Chuck and Ellie's dad. His story with Chevy Chase sure sounds like a parallel between Chuck and Bryce!

Where does all that leave Chuck & Sarah??? If they don't end up together in the end I'll be SO POed!

Anonymous said…
I'm happy (but not surprised) that 30 Rock is coming back for another season but really have my fingers crossed that Chuck will too. I love the show and think that it just keeps getting better and am really looking forward to the upcoming storyline with Chuck's dad (and Chevy Chase)!
1/16/2009

Unknown said…
Oh good grief. They renew The Office which is having an identity crisis, but they can't decide on Chuck, one of the best shows on the air. I have no faith in networks anymore.
1/16/2009