Riding the Tide Out to Sea: An Advance Review of the Final Season Premiere of "Battlestar Galactica" 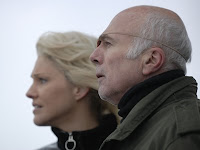 What defines us as individuals? Is it the terrible choices we've made and those made for us? The mistakes we've committed? The flaws in our characters? The people we've loved and lost? The horrors we've witnessed?

What truly defines us when everything else--career, rank, nationality--is stripped away? Are our natures programmed for us from birth? In other words: what truly makes us, well, us?

It's these existential questions that the intellectually dazzling Battlestar Galactica has always played with, throughout its four season run on Sci Fi. For most of the series, the humans and Cylons have engaged in a battle that presented the stakes as very much Us against Them. Them being the unknowable Other, so different from us in matters of birth, life, and death that it's nearly impossible for each side to sympathize with the other.

And yet over the course of the first half of the fourth season, a fragile alliance between the humans and Cylons has been forged in the fire of war. It's perhaps a reminder that the most divine of attributes--forgiveness--is perhaps present in both man and machine.

I had the chance recently to watch Battlestar Galactica's mid-season premiere episode ("Sometimes a Great Notion"), airing tomorrow night on Sci Fi, and was struck anew by the gritty philosophical elegance of Ronald D. Moore and David Eick's series.

Written by David Weddle and Bradley Thompson, "Sometimes a Great Notion" picks up where we last saw the beleaguered crew of the Galactica and their Cylon allies as they finally discovered Earth. Sadly, I'm prohibited by the network from revealing some truly major plot points in this week's episode, so I can't reveal just what they discover down on the planet, but I will say that it had major repercussions, not just for the future of both their races, but for several individuals who will never be the same after setting foot on the blue planet.

And that's perhaps what this episode of Battlestar Galactica is truly about: the notion of change, a tide that can't be fought no matter how hard we struggle. Life, as the crew of the Galactica learn, is nothing more than a series of transformations both internal and external. And change, as we all know, is hard to bear at times. What happens down on Earth profoundly affects Laura Roslin, the human race's dying leader, and forces her to confront the death of several dreams. So too does change affect Adama, especially after his discovery that his best friend, Saul Tigh, is a Cylon and a member of the vaunted Final Five.

While I can't discuss specifics about this heartbreaking and gripping installment, I will say that it features a number of shocking plot twists as well as some long-sought answers to some of the series' most enduring mysteries. Look for some vital clues to be gathered among the wreckage and wilderness on the planet as well as some shocking discoveries to be unearthed, Dualla to make a decision about her relationship with Lee, Chief Tyrol to grasp at shadows, Roslin to alter her beliefs, Kara to nearly confess a secret to Lee, D'Anna to commit to a new strategy, and for Adama to, well, grit his teeth and snarl as he is pushed to his very limits.

Yes, ladies and gentlemen, such words are often thrown around far too often but things will never be the same after this episode. By the time the end credits roll, no one--not the humans, not the Sixes or the Eights, not the Final Five--will emerge unscathed and unchanged from the fire of transformation. But it's what happens next, how they process and deal with new discoveries, that will test these individuals.

And truly isn't that what defines us in the end: the way that we react to status quo-altering experiences? Can we ever escape the burden of our lives, whether past, present, or future? And are we free to change the path we take or are we all locked into a neverending ring of fate, doomed to repeat the same mistakes forever more?

Season 4.5 of Battlestar Galactica, the series' last, kicks off Friday at 10 pm ET/PT on Sci Fi. And, FYI, be sure to pad your DVR recording time with some extra room: the episode runs over by 3 1/2 minutes.

Anonymous said…
I'm sure that this final season is going to be incredible and, from your review, it sounds like the premiere episode will be a doozy. And I would expect nothing less from this brilliant show. Thanks for the great advance review!
1/15/2009

Anonymous said…
Great review! I can't wait to watch this. I'm really curious about some of the things you hint at like Chief "grasping at shadows" and "shocking discoveries to be unearthed". Which I like any way as you say unearthed. And they ARE on Earth!
1/15/2009

Anonymous said…
Thanks for whetting our appetites Jace!