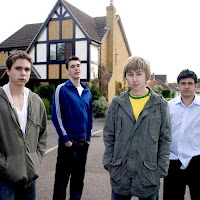 Both series, which are each comprised of twelve episodes, are slated to launch later this year on the digital cabler. The Inbetweeners originally aired on E4 and Channel 4, while sketch comedy Katy Brand's Big Ass Show aired on ITV2 in the UK.

Music fans should especially take note of The Inbetweeners, which features music from such acts as The Fratellis, Arctic Monkeys, Lily Allen, The Feeling, Kate Nash, The Wombats, The Cure, and Feist, among others in its first season.

The official descriptions for the two series from BBC America can be found below.

THE INBETWEENERS - U.S. PREMIERE
Written and created by Damon Beesley and Iain Morris - who were involved with Peep Show, The 11 O’Clock Show and The Flight of the Conchords - The Inbetweeners offers a painfully funny take on the squirming humiliations of teenage life. Will’s parents have just divorced and he has unwillingly had to move and change schools, forcing him to make an all new set of friends. His newly found peers, Simon, Jay and Neil are neither that cool or that credible. Marooned in middle-class suburbia, The Inbetweeners follows the four friends as they try to navigate the minefield of futile crushes, sibling brawls, getting drunk too quickly, riding roller coasters and fancying the girl next door.

KATY BRAND’S BIG ASS SHOW - U.S. PREMIERE
Sketch comedy, Katy Brand’s Big Ass Show is a whimsical universe of original characters and crazy celebrities with big egos and even bigger flaws. Full to the brim of pop star skits on everyone from Lily Allen to Usher, spoofs of well known celebrities Kate Moss and Kate Winslet, as well as original creations, Katy’s stars are exactly as she sees them in her own warped head. Katy has created an alternative world of celebrities; a warm and accessible world, in which their best and worst characteristics are amplified for comic effect.

Anonymous said…
Having watched every episode of INBETWEENERS and most of KATY BRAND, here's my take:

INBETWEENERS is laugh-out-loud funny, even at things that you really feel you shouldn't be laughing at, whether they are immature or slightly innapropriate. Pretty much everyone (especially blokes) will recognise elements of the lives of the characters for sure.

KATY BRAND is not as funny as she thinks she is, although her skits are more hit than miss. My personal fave is the character who is the host for those late night phone in competitions with inane word puzzles, attempting to screw people out of their money via premium pay lines to enter.... it's spot on a very funny.

I'm sure the US will love and hate both these shows in equal measure.

Sorry for the lengthy post - got a bit carried away! Keep up the great work Jace.
; )

slippy said…
[EDIT] apologies about the type errors and anonymous monicker above... my bad.

BraunMan said…
Not so sure about Katy Brand but I am definitely going to be checking out The Inbetweeners. Sounds like my kind of comedy!
4/21/2009

Thanks for the info on The Inbetweeners and Katy Brand: it's much appreciated and always good to hear from someone who has already seen the series in question and give us some idea of the content. (Never apologize for lengthy comments, BTW!)
4/21/2009

Edward said…
I can second the comment by "Anonymous". Inbetweeners is the funniest UK comedy in a while. Makes me glad I'm not 16 again..
4/21/2009

UKTVFan said…
Inbetweeners is brilliant. Unfortunately, BBCA will be censoring the language, so I suggest finding the unedited episodes online now (instead of waiting until "later this year" for censored versions).
4/22/2009