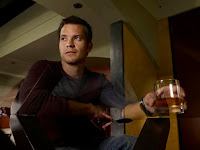 Timothy Olyphant (Damages) has been cast in FX's untitled Elmore Leonard project, which is based on a short story by Leonard entitled "Fire in the Hole." Olyphant will play U.S. Marshal Raylan Givens who returns to his hometown in Kentucky. "He has a certain jaggedness, but he also loves his job," said creator/executive producer Graham Yost. "He is like an anachronism: He wears a hat, cowboy boots and a holster on his hip. It's a little bit like he was born 100 years too late." Project, from Sony Pictures Television and Timberman/Beverly Prods., will be directed by Michael Dinner and will start shooting at the end of May. (Hollywood Reporter)

The Chicago Tribune's Maureen Ryan has a sneak peek at three scenes from Wednesday evening's 100th episode of ABC's Lost, entitled "The Variable." (Gee, does that title remind you of another famous installment?) All I can say is that this episode looks to pack quite a punch. (Chicago Tribune's The Watcher)

Dollhouse star Enver Gjokaj talks to E! Online's Jennifer Godwin about his character, Victor, and about what's coming up on the FOX drama, created by Joss Whedon. "We know he has a military background and that something bad happened," said Gjokaj about Victor. "Joss and I have talked briefly about that, but nothing is official." As for why Victor and Sierra (Dichen Lachman) seem to be propelled towards each other, Gjokaj said, "Pheromones? I'm not sure, but we know it's something deeper, more instinctual than liking her personality, because we don't really have those as dolls. I personally think Joss is asking, "What if there is such a thing as true love?" Something more than a pat psychological answer. What if two souls are attracted to each other even in the absence of memory?" (E! Online's Watch with Kristin)

Pamela Adelon (Californication) will star opposite Adam Carolla in CBS comedy pilot Ace in the Hole, where she will play the wife of Carolla's character, a nurse and mother of two. Should Ace in the Hole be picked up to series, Adelon would depart Showtime's Californication. Meanwhile, Leslie Bibb (Iron Man) has left NBC's untitled Justin Adler comedy pilot, following a creative shakeup that also saw Adler, the pilot's writer leave the project. Bibb's role is currently being recast. (Hollywood Reporter)

ABC announced several additions to its summer schedule, including three installments of news magazine Primetime, Primetime: Family Secrets, Primetime: Crime, and Primetime: The Outsiders, while Primetime: What Would You Do will return for another run. Series will air on Tuesdays and Wednesdays at 10 pm ET/PT throughout the summer. The network also has four-hour mini-series Diamonds and Impact, special J.K. Rowling: A Year in the Life, and a slew of reality series, including Great American Road Trip, which will now air Tuesdays at 8 pm beginning July 7th, and America's Got Talent, which will kick off with a two-hour opener on June 23rd. (Variety)

Spike is said to be close to signing a deal to acquire off-network cable rights to HBO comedy Entourage, possibly in conjunction with another channel in MTV Networks' stable, likely Comedy Central. Series will become available in 2010. (Broadcasting & Cable)

AMC's Mad Men took home the top prize yesterday at the BAFTA TV awards in London, where it won the trophy for best international series, beating out fellow nominees The Wire, Dexter, and The Daily Show with Jon Stewart, while Kenneth Branagh drama Wallander beat out Doctor Who, Shameless, and Spooks for the continuing drama prize. (Variety)

The New York Times talks to King of the Hill creator Mike Judge about the long-running FOX animated series wrapping its run after 13 seasons. Judge, who says that he wanted to stop working on the series six or seven years ago, says that there won't be a finale per se. "I’m not sure there will be a final episode this time around," he told the Times' Kathryn Shattuck. We did a final episode back in the first year we thought we were canceled. I was really proud of that last episode, and then when we didn’t get canceled, we had to kind of tweak it and do these different things to make it not seem so final. And I’m not sure there will be any kind of story arc. The thing I think we do well is kind of keeping it the same. I’m a big fan of just classic TV — the old Bob Newhart Show, Leave It to Beaver, The Andy Griffith Show. There was something kind of comforting in that, episode after episode, they didn’t change that much." (New York Times)

NBC is bringing back axed reality competition series The Chopping Block to the schedule. The series, which was pulled from the Peacock's lineup last month, will return on Friday, June 19th at 8 pm and air the five remaining episodes of the series. (Futon Critic)

Jon Hamm (Mad Men) and Jennifer Westfeldt (Kissing Jessica Stein) have set up production company Points West Pictures, which they hope will develop projects that will place them in front of and behind the camera. Company is in development on three projects, two of which are being written by Westfeldt. (Hollywood Reporter)

William Morris Agency and Endeavor are expected to vote today on a potential merger that would create a major new player on the talent representation scene. The combined joint entity, WME Entertainment, would offer 300 agents, one of the top client rosters, and an annual revenue of roughly $325 million. "The deal could trigger a new wave of consolidation, putting pressure on other smaller agencies to combine or find larger partners," writes The Los Angeles Times' Dawn C. Chmielewski and Meg James. "The last significant talent agency merger was in 2006 when International Creative Management bought the smaller Broder Webb Chervin Silbermann Agency in a move to inject new life into ICM's television business." (Los Angeles Times)

ABC Family has yanked freshman comedy Sophie off of its schedule effective immediately. The cabler will air back-to-back new episodes of fellow first-year comedy Roommates in the 9 pm hour and 10 pm hours on Monday nights beginning tonight, wrapping up its run now on May 4th, rather than June 15th. (Futon Critic)

MTV has given a series order to reality competition series The Stylist, which will pit fashion stylists against one another for a contract with a major agency, from Bunim-Murray. The cabler also ordered 80 additional episodes of dating series Parental Control, bringing the series' six season total to 200 installments. (Hollywood Reporter)

Style has renewed eight series, including Ruby, The Dish, How Do I Look?, Clean House, Split Ends, Clean House Comes Clean, Dress My Nest, and Whose Wedding Is It Anyway. The cabler has several new series in the pipeline including Mothers and Daughters of Dallas and Guiliana & Bill, a docusoap following former Apprentice winner Bill Rancic and his wife Guiliana, an anchor on E! (TV Week)

Bella Spruce said…
Very cool news about Mad Men winning the BAFTA award for best international tv series. I am in Mad Men withdrawal and can't wait for it to come back!!!
4/27/2009