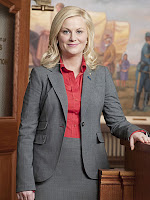 What did you think of the pilot episode of Parks and Recreation? Do you like the series' Mid-West milieu? Did you appreciate the use of The Office-style mockumentary format or did it grate on your nerves? Did you think Amy Poehler shined as Leslie Knope? And, most importantly, will you tune in again next week?

Next week on Parks and Recreation ("Make My Pit a Park"), Leslie (Amy Poehler) decides that they should canvass the community to take the public reading on the pit project before a public forum; despite being extremely far away from bringing in contractors, Tom (Aziz Ansari) starts calling in favors from various city vendors.

Eric (EricOnMedia) said…
I agree with your review—"Parks and Rec" seems undeveloped and rushed to air. I think "The Office" mockumentary format can be translated to another setting and cast, but here it feels forced and isn't as effective, mostly because the characters aren't as well-developed, interesting or revealing as on "The Office."

"The Office" wouldn't be so successful if it had been designed as a Steve Carrell vehicle, as "Parks" was for Poehler. One of my favorite aspects of "The Office" from its slightly shaky beginnings is that each character, no matter how minor, is well-rounded, full of personality and depth. "Parks" fails on this level, and unfortunately it's most evident in Poehler's Leslie Knope. In the premiere, the Knope character comes across as one-dimensional, shallow, and too familiar. We've seen versions of this character before, and in many cases it's been done better. The portrayal was predictable, unfunny and at times painful to watch.

Rashida Jones' blandly-named Ann Perkins is a notch better, but her motivations make little sense. Making pancakes for the layabout boyfriend is one thing. Dedicating your life to building a park because of him is another. It's a rather weak premise for bringing the character into the cast. Unlike the self-contained milieu of "The Office," her presence takes viewers outside the theme of "Parks" and it feels like an intrusion.

One other niggling detail: While "The Office" does a fair job of making Burbank look like an acceptable tv facsimile Scranton, "Parks" looks like Southern California.

The episode had two bright moments for me: Louden Wainwright and the sullen intern.
4/10/2009

Wes said…
@Eric Totally agree. Office worked b/c of its characters rather than because they had Steve Carell and found a character for him to play. Shows like this are chicken and egg situations and I feel that Daniels & Schur had Poehler on board before they had a concept for her and then shoehorned her into this show. It smacks of vehicle casting rather than organic comedy.

Loudon Wainwright showing up was awesome as it was so unexpected but the whole thing left me bored overall. Not sure they can get it together here and there needs to be a moratorium on mockumentary comedies already.
4/10/2009

tamra said…
I think people are being really critical of this show for no reason. THE OFFICE wasn't great when it started and now it's the best show on T.V. I'm going to watch every week. I'm happy NBC is showing this and other great shows.
4/10/2009

Mazza said…
Meh. I wasn't all that thrilled with P&R. Parts were funny. I think that Amy and Rashida's characters need to be written less broadly and more three-dimensionally.

Liked Tom hitting on Anne at the town hall meeting, Amy falling in the pit, the pancakes, the violent mural.

What happened to some of the funny bits from the promos? Like Amy talking about the old mayor being thrown from plane? I felt like the promos were funnier than the show itself.
4/10/2009

AskRachel said…
I actually really like the characters and thought they had a lot of potential but found the format to be stifling. The show needs to find its own voice and not be The Office 2.0. The cast is fantastic and could do a lot more if they weren't so restricted by the overtired, overused mockumentary style.
4/10/2009

Brian said…
I went into watching the pilot with low expectations, and was pleasantly surprised. Sure, it wasn't great, but it definitely has promise. Amy Poehler is adorable, and I really liked her romantic interest as well. They could afford to make Rashida Jones's character a little more interesting though.

As others have said, The Office had a very shaky start. (And, not including the most recent episodes, it hasn't been that great itself lately).
4/10/2009

derby said…
it should be better than it is. i did chuckle a few times, but i kept thinking, 'am i going to care 5 episodes from now?'

the mockumentary format really hinders the show, because it just doesn't need it. i will watch a few more episodes b/c i like the cast and pedigree, but i'm not thrilled out of the gates.
4/10/2009

Karen said…
It was okay. I hope it gets better though. Best scene: when Leslie showed the painting with the paper over the "bad parts." LOL.
4/12/2009

jacobus said…
I was hopeful, but this show sucked. I afraid it won't get better. The whole point is: "Look at these characters! They're so kooky! Doesn't that make you laugh? They're not going to do or say anything funny, but they sure are kooky, aren't they?!"

Ally said…
I honestly didn't laugh out loud once. Not once. I found a couple of moments amusing (Amy P listing the things she wants to build in the park, Rashida saying, "There really isn't that much land" and Amy P quickly saying, "We'll build some of those things."

I'll tune in again, but it's going to have to come up a lot. I really wish they hadn't gone with the mockumentary format.
4/14/2009