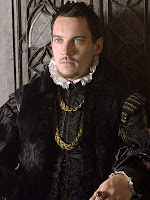 24 executive producer Howard Gordon talks to Entertainment Weekly's Hollywood Insider about the return of Kim Bauer (Elisha Cuthbert) to the FOX series. "Kim has been easily targeted and lampooned by fans, so we had to do it very carefully," said Gordon of Cuthbert's return. "Elisha was as sensitive to this as we were." Gordon, meanwhile, offers a few tidbits about the reason behind her return and about her relationship with Kiefer Sutherland's Jack Bauer. (Entertainment Weekly's Hollywood Insider)

E! Online's Jennifer Godwin was on hand last night at the Paley Festival's panel for HBO's True Blood and has some answers about the Sookie/Bill/Eric love triangle and what to expect for Season Two of the vampire drama, set to return in June. About what to expect for Anna Paquin's Sookie, executive producer Alan Ball said: "She spends the first half of the season focusing on vampires and vampire politics in Dallas, as sort of a favor to Eric, and she spends the last half of the season cleaning up the mess that some new supernatural creatures have created in her town—and she is pissed. She is not going to take it anymore." (E! Online's Watch with Kristin)

Pilot casting alert: Diane Farr has signed on to star opposite Peter Krause in NBC comedy pilot Parenthood, where she will play the wife of Krause's character. Meanwhile, Better Off Ted's Andrea Anders has landed one of the female leads on CBS comedy pilot Big D (pilot is in second position to ABC's Better Off Ted, which has yet to be renewed); Jill Clayburgh (Dirty Sexy Money) and Henry Winkler (Arrested Development) have been cast in NBC's untitled Justin Adler comedy pilot; Joanna Garcia (Privileged) will guest star on two comedy pilots: NBC's untitled Justin Adler pilot and FOX comedy pilot Cop House (it's worth noting that both roles were originally intended to be regulars); and Lyndsy Fonseca (Desperate Housewives) and Faith Ford (Carpoolers) will star in CBS comedy pilot The Fish Tank. (Hollywood Reporter)

Josh Gad (Back to You), most recently seen on Starz's Party Down, has signed on to star in two comedy pilots and will also act as a guest correspondent on Comedy Central's The Daily Show. He has joined the cast of CBS comeyd pilot Waiting to Die, where he he will play the best friend to T.J. Miller and Nick Thune's characters who is far to eager to please his wife. Gad has also signed on in a recurring capacity in the ABC comedy pilot No Heroics (a US remake of the British series of the same name), where he will play Horce Force, a superhero and former classmate of the gang at Superhero College who has the ability to summon horses at will. (Hollywood Reporter)

Sundance Channel announced several new series, including half-hour docuseries Be Good Johnny Weir, following U.S. figure skater Johnny Weir from Endemol/Original Media, and The Day Before, which looks at the lives of fashion models during the 36 hours before a runway show from Story Box Press and Deralf. The cabler also renewed Spectacle: Elvis Costello With... for a second season and announced that it had acquired two seasons of Aussie comedy Chandon Pictures. (Variety)

Bravo has ordered fashion competition series Launch My Line (formerly known as Celebrity Sew Off), which pits celebrities against one another as they attempt to launch their own clothing lines with the help of a fashion expert, and Jackie's Gym Takeover, a Kitchen Nightmares-style series from Shed Media that will follow Jackie Warner (Work Out) as she uses her experience to help struggling gyms. The cabler is also readying The Fashion Show, launching May 7th, and Top Chef Masters, which will launch June 10th. (Hollywood Reporter)

Entertainment Weekly's Michael Ausiello reports that 90210 star Dustin Milligan, who will be written out of the series at the end of the season, was conspicuously absent from Saturday evening's Paley Festival event. "I'm going to miss him terribly," said 90210 star Shenae Grimes. "He is an amazing guy and an amazing actor. We would bounce ideas off each other and we could be straight up with each other. We could be like, 'Chill with the mouth thing.' It was nice to have that on-set camaraderie. But we will keep in touch." (Entertainment Weekly's Ausiello Files)

Singer Adele will guest star as herself in an upcoming episode of ABC's Ugly Betty, slated to air in May. The episode finds Betty, Marc, and Matt supervising a photo shoot for a YETI assignment that improbably becomes a wedding. (TV Guide)

HBO Films has optioned Mark Halperin and John Heilemann's upcoming book "Game Change: Obama and the Clintons, McCain and Palin, and the Race of a Lifetime," about the 2008 presidential race. Charles Leavitt (Blood Diamond) will adapt the book, which is due to be published next year. (Variety)

AskRachel said…
I hope that Better Off Ted gets renewed. It's a fun, silly show with a great comedic cast and we need more of those right now!
4/14/2009

Ally said…
Damn - not a good sign for my favorite new show Better off Ted.

par3182 said…
the perfect scenario - 'better off ted' gets renewed while andrea anders moves on to another show (no slight against the actress, it's the character she plays that doesn't fit the show)
4/15/2009