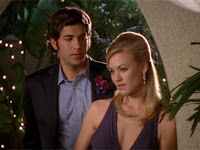 Not unsurprisingly, NBC's Chuck has topped USA Today's Save Our Show poll, scoring 54 percent of the 43,000 viewers who cast their votes in the ten-day online poll. The Warner Bros Television-produced series scored the top spot overall as well and was the most favored choice among men, teens and twenty-somethings, thirty-somethings, forty-somethings, whites, Asians, Hispanics, Westerners, Southerners, Northeasterners, and Midwesterners and the fourth favored choice among women as well. (If that's not cross-cultural appeal, I don't know what is.) (USA Today)

Adult Swim has acquired rights to the original UK series The Office, starring Ricky Gervais, from BBC Worldwide and will air both seasons as well as the Christmas special (which marked the series finale) this summer. Move marks the second deal between Adult Swim and BBC Worldwide, which previously sold rights to comedy The Mighty Boosh to the cabler, which launched the series on March 29th. (via press release)

As production on ABC's Grey's Anatomy approaches the 100th episode, creator Shonda Rhimes talks to USA Today's Bill Keveney about the ABC drama, Denny, spin-off Private Practice, and her new pilot Inside the Box. "We're heading on a journey," said Rhimes about Grey's Anatomy's use of Izzie's dead lover Denny. "[Viewers] are in the middle and don't have a map, so they can feel lost. But I know where we're going. For me, it's about looking at the larger picture. [...] What I thought was interesting was that anybody who knew anything about our show would think we had a ghost on our show. In the world in which our show operates, there is a way things happen, and clearly we don't do ghosts." (USA Today)

Disney has announced that it has joined NBC Universal and News Corp as a joint venture partner and equity owner of Hulu. Under the deal, Hulu will now be able to offer full-length episodes of current and library titles from Disney such as Lost, Grey's Anatomy, Desperate Housewives, Ugly Betty, Private Practice, and Scrubs, among many others. "From our landmark iTunes deal to our pioneering decision to stream ad-supported shows on our ABC.com player, Disney has sought to meet the constantly evolving viewing habits of our consumers, and today's Hulu announcement is the next important step in that ongoing journey," said Robert Iger, President/CEO of The Walt Disney Co. (Hollywood Reporter)

Jon Gosselin, star of TLC's reality series Jon & Kate Plus 8 has issued a statement to Entertainment Weekly after US Weekly published a photo of him leaving a club at 2 am with a female friend. "Like most people, I have male and female friends and I'm not going to end my friendships just because I'm on TV," said Gosselin in an exclusive statement. "However, being out...late at night showed poor judgment on my part. What makes me sick is that my careless behavior has put my family in this uncomfortable position. My family is the most important thing in my life and it kills me that these allegations have hurt them." (Entertainment Weekly's Hollywood Insider)

ABC Family has officially cancelled freshman comedy Roommates. The writing was on the wall when the basic cabler opted to burn off the final eight episodes of the series over two consecutive Monday evenings, with the final four episodes to air in a two-hour block this coming Monday night. (Hollywood Reporter)

Entertainment Weekly's Marc Bernardin wonders why viewers seemingly don't want science fiction on television anymore, with most recent sci fi series--Terminator: The Sarah Connor Chronicles, Dollhouse, Chuck, Life on Mars, and Pushing Daisies--either canceled or on the bubble for next year. "Have we, as a society," writes Bernardin, "just become too -- gulp -- stupid for science fiction?" (Entertainment Weekly's PopWatch)

NBC has renewed reality series Celebrity Apprentice for another season and plans to air the next cycle in spring 2010. "It's a valuable franchise and proven competitor," said NBC Universal's alternative topper Paul Telegdy. [Editor: meanwhile, there's still no news of a possible Chuck renewal. Sigh.] (Variety)

TNT will expand its original programming to three nights a week this summer, with Mondays playing host to The Closer and Raising the Bar beginning June 8th, Tuesdays the home of Wedding Day, HawthoRNe, and Saving Grace beginning June 16th, and Wednesdays the berth for Leverage and Dark Blue starting July 15th. (Futon Critic)

IFC has announced a slew of new programming for the 2009-10 season, including Chris Kattan-led three-part comedy Bollywood Hero, airing August 6-8th, Food Party, launching June 9th, which features a "surreal mixture of puppets, weird special effects and cooking hosted by [Tru] Tran," six-part series Monty Python: Almost the Truth (The Lawyer's Cut), which features interviews with the surviving members of the comedy troupe, telefilm Laurel K. Hamilton's Anita Blake: Vampire Hunter, which will debut in 2010, and Dinner with the Band. The cabler also announced that it has acquired BBC comedy series Ideal and Wrong Door and Canadian series The Jon Dore Television Show and renewed Z-Roc and The Whitest Kids U Know. (Hollywood Reporter)

Discovery and Hasbo have closed a deal for a joint venture that will encompass a television network and a website which are dedicated to family-based entertainment. Discovery will receive $300 million for the entertainment assets of its Discovery Kids Network in the US which will be rebranded next year and will feature series from Discovery's library of educational programming as well as series based on Hasbro properties including G.I. Joe, Transformers, Romper Room, Trival Pursuit, Cranium, and My Little Pony. (Hollywood Reporter)

Reveille has announced that it has teamed up with publisher Rodale to develop a reality series based on David Zinczenko and Matt Goulding's best-selling non-fiction book "Eat This, Not That!" (via press release)

Nikki Finke is reporting that, in light of the recent approved merger between William Morris Agency and Endeavor, that the majority of the TV reality department, including Mark Itkin, John Ferriter, and Colin Reno, have decided to leave and set up camp at CAA while talent agent Dana Simms asked to be released from her contract. (Deadline Hollywood Daily)

CMT has picked up musical series The Singing Bee, which aired its first season on NBC last year, and will launch the series' second season on June 16th. So far the series, which is produced by Gurin Co. and Juma Entertainment, has no host but the producers say that they are close to closing a deal on that front. (Hollywood Reporter)

Unknown said…
"Have we, as a society," writes Bernardin, "just become too -- gulp -- stupid for science fiction?"

NBC has renewed reality series Celebrity Apprentice for another season and plans to air the next cycle in spring 2010.

Meanwhile, there's still no news of a possible Chuck renewal.

Yes, Mr. Bernardin, we have.

[Sorry about the multiple deletes. Preview didn't show me an accurate preview.]
4/30/2009