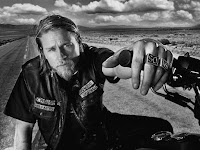 FX has renewed motorcycle drama Sons of Anarchy for a fourth season. Series, which wraps up its third season on November 30th, is the most-watched series in the cable network's history. "Sons of Anarchy is the most popular show FX has ever had, and the No. 1 series in basic cable for our key demographic," said FX president/general manager John Landgraf. "It is also one of the best, most original series on television." (Variety)

Elsewhere, Syfy renewed freshman drama Haven for a second season, with thirteen episodes on tap for next summer. Production is slated to resume in the spring in Nova Scotia on the sophomore season. (Variety)

Robert Kirkman's zombie comic, "The Walking Dead," which is heading to the small screen later this month with AMC's television series of the same name, will also be transformed into a trilogy of original novels, the first of which will be released in 2011. Kirkman will provide the concept and outline for the novels, which will be written by Jay Bonansinga. (Deadline)

Entertainment Weekly's Michael Ausiello is reporting that Raymond J. Barry (Lost) has been cast in what appears to be a recurring role on CBS' NCIS: LA, where he will play Branston Cole, an ex-secret agent who has crossed paths with Linda Hunt's Hetty. Barry's character is described as appearing "rail and blind from a stroke he suffered a while back, but he remains vigorous and sarcastic as he lives out the remainder of his days in a retirement home. A man with a long history and a deep well of secrets, he seems to still enjoy the game of espionage and manipulation, leading his handlers down questionable paths.” He'll make his first appearance in November. (Entertainment Weekly's Ausiello Files)

TV Guide Magazine's Will Keck is reporting that Danny Trejo (Machete) will guest star on ABC's Modern Family, where he will play the school janitor in an upcoming episode. "The Modern Family episode finds Claire in charge of an upcoming school dance at the boys' school," writes Keck. "While all the other moms are afraid of Danny's menacing janitor, fearless Claire forms an unlikely bond with the guy." (TV Guide Magazine)

Ryan Seacrest is said to be in talks with CAA and AEG about launching a cable network. "The business venture is in very preliminary stages, but the network's concept is described as music, pop culture and lifestyle oriented," write The Hollywood Reporter's James Hibberd and Kim Masters. "Seacrest is likely to have some kind of on-air presence in the venture. Unlike Oprah Winfrey's upcoming OWN cable channel, however, Seacrest is expected to operate mainly as an influential partner rather than serve as the face and personality of the network. The channel won't be 'Seacrest TV, but will have its own brand. (Hollywood Reporter)

Rebecca Mader (Lost) is set to guest star on NBC's Law & Order: Los Angeles this season, where she will play a woman named Rebecca. "The fictional Rebecca’s lot in life is to get run over by a car, yet miraculously survive," writes Fancast's Matt Mitovich. (Fancast)

Chris D'Elia (Monk) has been cast in TBS' upcoming period comedy series Glory Daze, where he will play Stankowski, described as "as an older, oracle-style figure to the members of a college fraternity." (Variety)

Deadline's Nellie Andreeva is reporting that ABC has given a script order (plus penalty) to an untitled comedy which will star Wilmer Valderrrama (That '70s Show). Project, which hails from Murray and Judah Miller, will have "a musical component" and will be directed by Akiva Schaffer. (Deadline)

Ed Begley Jr. will turn up on Shonda Rhimes' midseason medical drama Off the Map, according to TV Guide Magazine's Will Keck, who reports that the St. Elsewhere veteran will play Hank, a dentist, in the season's fifth episode. (TV Guide Magazine)

Oxygen has renewed Tori and Dean: Home Sweet Hollywood for a sixth season and ordered a new Tori-centric reality project entitled Tori and Dean: Storibook Weddings, which will "focus on Spelling's party planning skills while McDermott focuses on the groom's issues leading up to the pair's nuptials." (Variety)

Deadline's Nellie Andreeva is reporting that Sony Pictures Television has signed a two-script deal with writer/actress Stephnie Weir, who wrote ABC comedy pilot Wright vs. Wrong. The first project under the new deal is an ABC comedy pilot that is set at a diner. (Deadline)