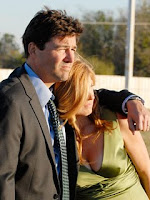 DirecTV has unveiled its first promo trailer for the fifth and final season of Friday Night Lights, which kicks off at the end of the month on the 101 Network (and will likely air next summer on NBC).

Set to The Black Keys' "When the Lights Go Out," the trailer is light on story but heavy on atmosphere as it depicts the cast of characters--including Kyle Chandler's Eric Taylor, Connie Britton's Tami, Jurnee Smollett's Jess Merriweather, Aimee Teegarden's Julie, Michael B. Jordan's Vince Howard, Madison Burge's Becky Sproles, and Matt Lauria's Luke Cafferty--getting dressed and assembling so that they can walk en masse to some kick-ass beats.

The full promo for Season Five of Friday Night Lights can be viewed below as well as the episode description for the season opener.

Episode 501 ("Expectations"): Coach Taylor tempers high expectations for East Dillon’s impending season as Tami becomes frustrated in her new job. Meanwhile, Vince and Luke work to recruit a new player for the Lions’ squad and Dillon bids farewell to two alumni as they prepare to leave for college.

The fifth and final season of Friday Night Lights premieres on October 27th at 9 pm ET/PT on DirecTV's The 101 Network.

ecuamerican said…
Great promo but wish some of the old characters would be on it as well. Even though they are no longer on the show, I'm sure they'll come back in some capacity. I'm looking at you, Lyla! Speaking of... where's Tim?? Still doing time?
10/05/2010

Anonymous said…
Great show, hate to see it end. But having it first on Direct TV is crap. Dish is way better than Direct and UVerse is better than either one. It's still good to watch if it makes it to NBC during the summer when there's nothing new, but the plot lines trickle down and that hurts.
10/05/2010