This Thing of Darkness: An Advance Review of BBC America's Luther 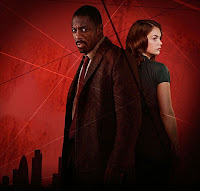 Idris Elba's haunted detective, DCI John Luther, is at the center of BBC America's newest drama offering, the intense psychological drama Luther, created by Neil Cross (Spooks). Fiery-tempered and prone to violence, Luther is often a thug with a policeman's badge, an amoral copper with a need for justice and a taste of darkness.

The six-episode first season of Luther begins this Sunday on BBC America after a successful run on BBC One earlier this year. A bruised Valentine of a police procedural, the series charts the moral disintegration of John Luther following an incident in which he seemingly let a child killer fall to his death rather than saving him. Was it justice? And is there a difference between man's justice and the law's?

Elba plays Luther with a burning anger, a righteous indignation at the presence of evil in the world. But like any man who has stared into the abyss, it has stared right back into him, corrupting him with its darkness. Returning to work after a breakdown, all eyes are on the unpredictable Luther, even as he attempts to get his life back on track in light of that moral breach. (You can read my interview with Elba at The Daily Beast.)

But life has moved on without John Luther.

His marriage to wife Zoe (Rome's great Indira Varma) in in shambles. Zoe has taken up with a new lover, human rights lawyer Mark North (Collision's Paul McGann), but Luther can't wrap his head around the fact that their relationship is over. It, however, only makes too much sense that Zoe has chosen to start over with someone who happens to be Luther's polar opposite: a sensitive soul whose profession is at odds with Luther's unorthodox methods. She's chosen saintly over id-driven, really.

As he attempts to reclaim his life following his suspension from the Metropolitan Police, Luther is assigned a new partner--Detective Sergeant Justin Ripley (Occupation's Warren Brown)--and a new case: the brutal murder of a couple and their dog, a crimson-stained bloodbath that turns up few leads and only one suspect: the couple's icy and brilliant physicist daughter, Alice Morgan (Jane Eyre's Ruth Wilson).

Did Alice viciously murder her parents? And for what end? What secrets do her crystal blue eyes conceal? And just why is she taking an interest in Luther's own life? Is she friend or foe? It's these answers that the first season of Luther seeks to answer, positioning Luther and Alice as a cross between combatants and potential lovers, two brilliant minds whose instantaneous connection will either save or damn them both.

What follows is a taut psychological thriller, an intense game of cat and mouse that pits the wits of Luther and Alice against each other, even as it offers an exploration of moral relativism. Alice's belief that nothing matters is at cross-purposes with Luther's need for justice; her cool detachment the opposite of Luther's fiery anger. Sparks, as they say, instantly fly between the two.

On the surface, Luther is a police procedural: ghastly crimes--everything from Satanic kidnappings, sniper attacks, and serial killings--occur and Luther and Ripley investigate and attempt to apprehend the perpetrator, who is each week identified at the start of the episode, making it less of a whodunit and more of a "whydoneit" akin to Columbo or a Ruth Rendell novel.

It's also an incisive workplace drama, depicting the inner workings of the Metropolitan Police's Serious Crime Unit and the temptation that detectives face to cut corners, to exact their own vengeance, to test their own moral ambiguity in pursuit of some serious villains. Saskia Reeves (Spooks) plays Luther's well-intentioned boss, Detective Superintendent Rose Teller, who attempts to balance the needs of the force against her support of Luther and his unusual policing style. Steven Mackintosh (Criminal Justice) is Luther's trusted ally, DCI Ian Reed, a man who has Luther's back but may have inherited his friend's own sometimes dubious outlook on life.

And it's also a gripping, white-knuckle psychological thriller, as Luther faces off with Wilson's Alice Morgan, a woman so gifted that she excels at everything she encounters, including murder. Once Luther has entered her dangerous web, he's ensnared by her madness and her genius, their every encounter escalating as Alice makes Luther her latest project. But does she want to kiss him or kill him?

Elba crackles with energy as John Luther, easily the best role he's played since The Wire's Stringer Bell. It's fantastic to see Elba in such a physical and emotionally draining role: his passion, his fury, and his thirst for justice resonate in every scene. Wilson is breathtaking as Alice, incandescent and smoldering even as she buries her emotion under a veneer of ice. But there's a coquettish danger to her every movement, every bite of her lower lip, toss of her hair reveals a cold-blooded serpentine nature to Alice. (It's almost impossible to tear yourself away from Wilson's performance, so perfectly cast as she is here.)

I will say that some of Luther's action--particularly in the later part of the season--does require a very willing suspension of disbelief and the procedural mysteries often have a hole or two in the plotting that niggle afterwards, but that's a rare flaw in an otherwise taut and accomplished series, casting an intoxicating spell that sticks with you long after the final scene.

It's not one to be missed.

pmurfield said…
I can't agree more with your evaluation of this show. I've watched the whole season and was kept entirely on the edge of my seat each episode. The actress, Indira Varma, who plays Luther's ex-wife, has joined the cast of Human Target.
10/17/2010