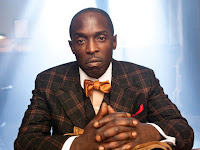 What did you think of last night's brilliant episode of Boardwalk Empire ("Anatasia"), the series' very best to date?

Over at The Daily Beast, you can read my latest feature, entitled "Boardwalk Empire's Racial Divide."

In the piece, I talk to Michael Kenneth Williams about Chalky White, preparing for this week's episode--and in particularly his haunting and gripping monologue--the legacy of The Wire's Omar Little, and how lucky he is to be part of the cast of Boardwalk Empire, Chalky's relationship with Nucky Thompson, Steve Buscemi and Michael Pitt, and more.

Next week on Boardwalk Empire ("Nights in Ballygran"), Nuckyʼs attempts to usher in a joyous St. Patrickʼs Day are undermined by Eli, Margaret and Van Alden.