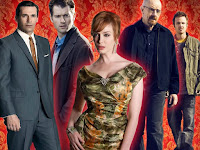 Those titles are intimately familiar to any television devotee and cabler AMC, the home to those groundbreaking series, is about to launch their fourth original series this weekend with The Walking Dead.

Over at The Daily Beast, I examine AMC's success, speaking to the channel's top executives--president/general manager Charlie Collier and SVP of original programming Joel Stillerman--as they dive headfirst into the horror genre with Sunday's The Walking Dead.

The piece, entitled "AMC: Television's Hottest Network," contains a discussion with Collier and Stillerman covering AMC's brand, their programming decisions, and the future and challenges for the basic cable network as well as topics such as the fate of Rubicon, next year's crime drama The Killing, and much more.

gg said…
AMC's move to the horror genre disappoints--especially as I've been a devoted viewer of "Breaking Bad," "Mad Men," and "Rubicon"--so much that it may count me as a viewer no more.
10/31/2010