Syfy's Caprica is Toast; Better News for Bored to Death and Eastbound and Down 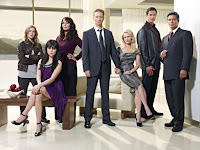 Syfy has axed the Battlestar Galactica prequel spinoff and will be pulling the remaining episodes from the schedule, effective immediately.

Which doesn't mean that you won't get to see how the season ended. Syfy also announced that it would air the remaining five episodes sometime next year, according to the press release:

"The remaining first run episodes of Caprica -- airing Tuesdays at 10/9c -- will be removed from the schedule as of next Tuesday, November 2. These final five episodes of the season will be re-scheduled to air at a to-be-announced time in the first quarter of 2011, and will conclude the run of the series."

News comes on the heels that the cabler has ordered a pilot for another Battlestar Galactica prequel series, entitled Battlestar Galactica: Blood & Chrome, which will return the series' setting to war-torn battles and Viper maneuvers. (I had wondered just what Syfy would do with Caprica last week when that announcement was made.)

"We appreciate all the support that fans have shown for Caprica and are very proud of the producers, cast, writers and the rest of the amazing team that has been committed to this fine series," said Syfy programming chief Mark Stern in a statement. "Unfortunately, despite its obvious quality, Caprica has not been able to build the audience necessary to justify a second season."

No word on just when those remaining episodes will unspool but the fact that Syfy has yanked the series from its lineup--a real rarity among cable networks--points towards just how dismal the ratings were for this Syfy original series, ratings that likely weren't helped by the move to Tuesday evenings at 10 pm where there was a hell of a lot more competition from the broadcast networks than on Fridays.

The news was better for fans of HBO's edgy comedies Bored to Death and Eastbound and Down, both of which were renewed yesterday for third seasons.

I've seen the remaining episodes of this current season of Bored to Death and thought they were among the series' sharpest and most nuanced to date. Fun, hilarious, and meaningful. I'm going to miss this show between seasons. Bored to Death has consistently emerged as one of the most underrated comedic gems on television. I'm glad to see HBO giving it a vote of confidence with another season.

What do you make of the news? Is Syfy right to cancel Caprica? Are you sad to see it go? And are you happy by HBO's renewals for Bored to Death and Eastbound and Down? Discuss.

wdavi said…
I'm very sorry to hear about Caprica's ending. Airing it on Tuesday night sealed it's doom. The episode last Tuesday was the best of the season.
10/28/2010

Anonymous said…
Yanking it from the schedule with only 5 episodes left? Why would they do that? How many times can they rerun Giant Shark Vs. Mega Octopus?
10/28/2010

jlschantz said…
I liked this show, but then again, as a sci-fi connoisseur, I gravitate to shows that have no audience. For instance, Firefly, then Serenity. Every time I watch Castle, all I see is Mal. Browncoats ans Cylons forever!
10/29/2010