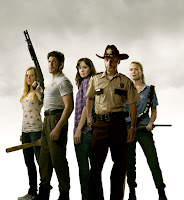 Zombies represent a real nexus of fear for me, something approaching an all-out phobia.

Perhaps it has to do with the fact that zombies--unlike, say, other horror-based characters like vampires or werewolves--are brought about by something uncontrollable like a virus. They become a faceless mob, hell-bent on feasting on human flesh, transmitting the virus as it takes over the world. Unlike vampires (whose hunger is based upon something entirely different and inimical), zombies have no intellect. Rather they represent something alien, chaotic, and unstoppable, a walking virus in rags and bones that doesn't realize that it has shed its last vestiges of humanity.

One of the most eagerly anticipated new series this fall is AMC's The Walking Dead, a horror drama based on the ongoing comic book series by Robert Kirkman that's executive produced by Frank Darabont and Gale Anne Hurd. The six-episode first season launches on Sunday, bringing a horror series to basic cable fittingly on Halloween night.

In the hands of Darabont and his team, that central notion of humanity is explored through the nightmare situation that unfolds. What makes us essentially human? If we become monsters in the name of survival, do we lose that inherent humanity? How does one live when surrounded with so much death? Is there any possibility of happiness to be wrung out of this new hell? What happens when we're alive but dead inside?

The answers to those very questions are at the heart of this gripping, ultra-violent series, which follows the survivors of a full-on zombie apocalypse. Whether they're shooting or beheading zombies, those ragtag humans remaining are holding on dearly for survival and the series explores the unbreakable nature of the human spirit. Simple pleasures--a hot shower, a fast car, the sight of a loved one--take on monumental weight in the face of such horrific adversity.

British actor Andrew Lincoln (This Life, Love Actually) stars as Officer Rick Grimes, a local deputy sheriff who is in a coma at the time of the zombie uprising and awakens in a deserted hospital to a world that's very different than the one he left behind, a dark mirror image of where the familiar and comforting have turned topsy-turvy. (The comparisons to 28 Days Later are inevitable.) A vase of fresh flowers is long dead, its petals crushed and dried. A nurse's station becomes an ominous place, the creaking doors, chained and padlocked, containing the dead who continue to walk. 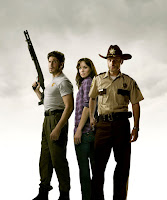 Rick provides a natural entry point to the series for the viewer, his disorientation ours as he attempts to find his bearings in these new circumstances. Where are his wife and son? What has happened to the world while he was sleeping? His journey will take him back to their house and ultimately out into the world, on a mad quest to reunite his family.

But this is a horror drama, after all, and the stakes are high, as is the mounting body count. Rick's journey towards Atlanta becomes a path of destruction and the pilot episode ("Days Gone Bye") is one of the most tension-ridden episodes of television you'll ever see, a white-knuckle thrill-ride that had me breathless with anticipation and dread. The ominous tone and foreboding atmosphere is ably assisted by cinematic-level visuals, sweeping shots of emptiness that signal the isolation and fear gripping Rick while rendering the swarms of zombies, their teeth and nails and rotting flesh, all the more terrifying.

As I mentioned earlier, I have a real fear of zombies that's almost paralyzing in its severity, but I couldn't help but fall under the spell of The Walking Dead's opening salvo. The plot is arranged in such a way that it becomes impossible to look away, dragging you along with its breakneck pacing and overwhelming horror. Its more philosophical questions remind of the short-lived British television drama Survivors, which also explored the ways in which we hold onto--or discard--our humanity in the face of cataclysmic change. The empty streets of Atlanta, however, hold nothing but death at the hands of the savage mob, just as in Survivors it contained a viral death warrant.

I will say that I was slightly let down by the series' second episode ("Guts"), which pushed it into far more prototypical horror territory, negating some of the moral importance of the pilot episode. Rather than continue to mine those themes, the episode focuses much more heavily on the logistics and terror aspect of the zombies as Rick finds himself in an impossible situation and then goes from the frying pan into the fire. (Lest I spoil plot particulars, I'm being intentionally vague here.) Still intense, but the violence begins to grate rather than engage after a while.

Additionally, the dialogue in the second installment felt particularly stilted in this episode and unrealistic and certain characters--again, I won't say who--behaved in manners that seemed to shout out that they had never seen Scream or any other horror movie and didn't know the "rules." (Stupid behavior, after all, gets you killed.) Rather than feel panic for these individuals, I actually found myself feeling that it would be justified for them to get eaten after behaving so idiotically. (Which is a bit of a problem in a series about survival and humanity.)

Fortunately, the third episode ("Tell It to the Frogs") put the series back on track in my opinion, better balancing the horror and dread with humanity and hope, zombies with matters of the heart and soul. It also delves into the makeshift community established by the survivors of the zombie storm, a place where members attempt to recreate society anew with rules, chores, regulations, and lookout duty. It's a place where a string of tin cans becomes an early warning system, where clothes are washed by hand, and the simple pleasure of fishing for frogs becomes a wish fulfillment fantasy.

The Walking Dead's cast is top-notch. Lincoln simmers with intensity, his honor and duty as affixed to him as his deputy sheriff's uniform. (I can't get one particular scene, in which he solemnly apologizes to a female zombie before ending her, out of my mind.) Jon Bernthal, who plays Rick's partner Shane, exudes a hard sadness. Former Prison Break star Sarah Wayne Callies plays Rick's wife Lori, a woman who is determined to keep her son Carl (Chandler Riggs) safe. Look for Steven Yeun to break out as Glenn, whose irrepressible nature is at odds with the horror witnessed around him. Michael Rooker and Norman Reedus are terrifically terrifying as redneck brothers Merle and Daryl Dixon.

I'm intrigued to see just where The Walking Dead is going and how long it can sustain its tension and horror in the long run. But despite some bumps in the road (particularly, again, in that second episode), even this zombie-phobe is along for the ride. Though I might just be watching with my hands half-over my eyes.