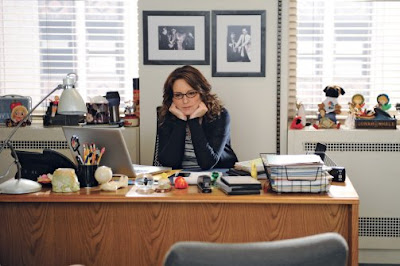 Blerg. 30 Rock will end its seven-season run later this month, meaning that we'll have to say goodbye to Liz Lemon, Jack Donaghy, and the TGS crew... though the show's creator, Tina Fey, isn't going anywhere just yet.

In this week's Newsweek (and over at The Daily Beast), you can read my latest feature, "30 Rock Wraps Up Seven Iconic Seasons," in which I examine the comedic legacy that the show leaves behind.

Back in 2006, one of the year’s most highly anticipated new shows was a roman à clef set at a Saturday Night Live–style sketch comedy show. No, it wasn’t Tina Fey’s 30 Rock, but Aaron Sorkin’s Studio 60 on the Sunset Strip, which also aired on NBC and died in 22 episodes. In fact, 30 Rock was very nearly canceled right out of the gate, with nearly half its 8.2 million viewers fleeing by the fourth week. But instead of being axed, 30 Rock became a sleeper hit. The show that gave us Liz Lemon and launched a thousand catchphrases (“Blerg!”) wraps up a seven-season run at the end of January.

30 Rock made creator-star Tina Fey—a former SNL writer and anchor of its talent springboard “Weekend Update”—a household name, while the show soon became a critical darling, known for its smart, tongue-in-cheek writing and acerbic wit. Beneath the absurdist single-camera comedy trappings of 30 Rock was a hyperliterate cultural magnet, one that exerted a powerful attraction toward the cultural memes of the day, not to mention bipartisan politics, celebrity vanity, corporate mergers, and the eternal struggle faced by working women to have it all.

In Liz Lemon, the harried executive producer and head writer of the comedy show TGS, Fey created an everywoman whose flaws were in fact part of her attractiveness; her persistent fear of exercising and love of junk food refreshing in an era of actresses who would like viewers to forget they have to eat at all. 30 Rock was, in many ways, a bildungsroman depicting the psychological development of Liz as she moved into a semirational adulthood, surrounded by a crowd of unruly eccentrics—such as Jane Krakowski’s Jenna Maroney, Tracy Morgan’s Tracy Jordan, and Jack McBrayer’s Kenneth Parcell—and an unlikely mentor in her boss, Alec Baldwin’s ultraconservative executive, Jack Donaghy.

But rather than make, as most Hollywood projects would, marriage the inevitable conclusion to Liz Lemon’s saga, 30 Rock bucked that long-held trend by marrying off Liz before the ending and downplaying her wedding altogether. There would be no special episode, no electronic invitations on the NBC website, no fuss about reaching yet another milepost on Liz’s uncharacteristic journey. Instead, the show has held out Liz’s ultimate goal—motherhood—as a possible ending for the overworked writer, though it has once again defied expectations. A recent episode suggested that Liz would be adopting an older child, her quest toward motherhood not reliant on biology or medical intervention. In doing so, Fey signaled yet again that 30 Rock was not a traditional comedy defined by traditional sitcom trappings: it was a glorious metareflection of the times we live in.

Fey cohosted the Golden Globes telecast with Amy Poehler this year, the first time two women had done so, well, ever. It was a big night for women in general, between the Cecil B. DeMille Award for Jodie Foster and the wins for Lena Dunham (another multihyphenate, like Fey, it should be noted) and her HBO comedy, Girls. Dunham thanked Fey and Poehler, calling them “inspirations.” And it’s true: Girls gets most often compared to Sex & the City, but without Fey and 30 Rock, it’s possible it might not have existed.