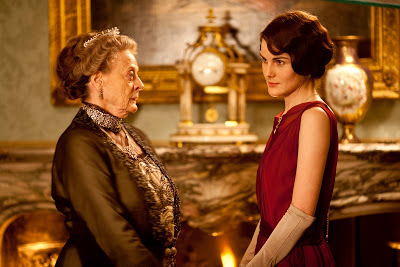 Downton Abbey is back, and I review the sensational third season—and the highly controversial finale—of the British period drama, which returns to PBS’s Masterpiece on Sunday. WARNING: Minor spoilers ahead!

Over at The Daily Beast, you can read my latest feature, "Downton Abbey Season 3 Review: A Return to Form," in which I review the third season of PBS's Downton Abbey ahead of its premiere on Sunday evening.

Downton Abbey is back.

For some, that’s incentive enough to tune in to the award-winning British period drama, which returns to PBS’s Masterpiece Classic on Sunday, Jan. 6, for another season of soapy intrigue with the Crawley clan and their servants. Other viewers, who like me were disappointed with last season, will take more convincing. They should take heart: Season 3 of Downton is a return to form for the show, recapturing the dazzling wit and sweeping romance of the now-classic first season.

I was intensely critical of Season 2 of Downton when it aired last year. The sophomore season lacked the deft plotting and nuance of the first year, to say nothing of the disastrous “Patrick Crawley” subplot or the miraculous recovery of paralyzed heir Matthew Crawley (Dan Stevens), who nearly leapt from his wheelchair to dance the foxtrot. Such miscues mired the show in histrionic soapiness, upsetting the delicate balance between domestic drama and social change. Downton, after all, functions best when it focuses on small moments—a missing snuffbox, a snow-swept proposal, a knock on a door—not over-the-top plot twists.

Which isn’t to say that Season 3 lacks surprises. Alternately humorous and heartbreaking, Downton’s stunning third season packs several narrative punches into PBS’s seven-week run. Hopes are dashed, losses mount, and the most bitter change comes uninvited to Downton Abbey. That’s to be expected in a serial like this one, where stasis is the enemy of the narrative. Creator Julian Fellowes appears to be aware that the characters must change and grow, and so must their circumstances.

Indeed, Downton’s central conceit, keenly felt this season, seems to be the collision between the traditional and the modern, between those attempting to remain entrenched in the past—such as Lord Grantham (Hugh Bonneville) and his ever-vigilant butler, Carson (Jim Carter)—and those looking toward the future. But change always comes at a price, and calamity has a way of forcing drama, after all.