The Daily Beast: "House of Cards: Inside Netflix's First Show" 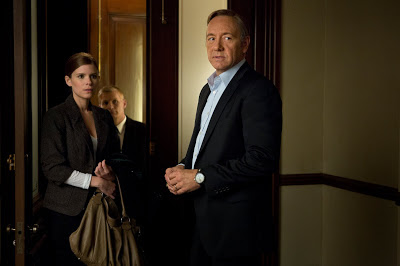 Netflix is jumping into the original programming arena with a remake of the BBC miniseries ‘House of Cards,’ all 13 episodes of which will be available for streaming on Friday. I talk to David Fincher, Beau Willimon, and Kate Mara about the adaptation, Frank and Zoe’s twisted dynamic, television antiheroes, and more.

Over at The Daily Beast, you can read my latest feature, "House of Cards: Inside Netflix's First Show," in which I sit down with David Fincher, Beau Willimon, and Kate Mara (as well as Andrew Davies) to discuss Netflix's upcoming (and paradigm-shifting) original series, House of Cards, which launches Friday with all 13 episodes available same day on the streaming service.

The quest for power knows no nationality or political allegiance.

In House of Cards, the BBC’s seminal 1990 miniseries, based on the novel by Michael Dobbs, Ian Richardson’s Francis Urquhart is the Machiavellian chief whip of the Conservative Party in the days following Margaret Thatcher’s fall from grace. After being passed over yet again, the deceptively placid Urquhart schemes, manipulates, and plots his way over the bodies of his colleagues and former friends in a bid for that most elusive of goals: true power.

On Friday, Netflix will unveil its American remake of House of Cards, written by Beau Willimon (Farragut North) and directed by David Fincher (The Girl with the Dragon Tattoo). In a paradigm-shifting move, the streaming video giant Netflix will be releasing all 13 episodes of the show’s first season on the same day, a move that could sound a death knell for the traditional scheduling models of network television. Gone are time slots, episode run times, and any sense that the viewing experience is being dictated by anyone other than the consumer, who can choose to watch as few or as many episodes of House of Cards as he wishes.

“It’s fully in the audience’s hands to decide what their own experience is,” Willimon told The Daily Beast earlier this month. “The same way that you read a novel. You can read Anna Karenina in two days, or you can read it over a year. And I think that’s better because it personalizes the experience.”

Francis Urquhart, one can’t help but think, would surely appreciate this power grab.

In Willimon and Fincher’s version of House of Cards, Urquhart is reincarnated as Francis “Frank” Underhill (Kevin Spacey), a Democratic chief whip from South Carolina whose shark-like intelligence—and ruthless amorality—is depicted as a natural side effect of the American Dream. Here, the story is transplanted from Westminster to Washington, where the plot revolves around the dynamic between Underhill and the ambitious reporter Zoe Barnes (Kate Mara). Like Frank, Zoe is overlooked and undervalued, dismissed as a blogger and a “Twitter twat” at one point. Trading secrets and access, the two form a mutually beneficial alliance that could ultimately topple an entire presidential administration.

“She is not as dangerous as Frank is, but I would definitely say she’s unpredictable,” said Mara. “To him, she is dangerous. They’re dangerous to each other.”