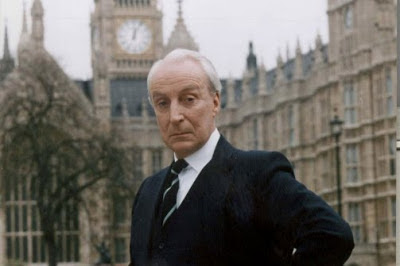 Ahead of David Fincher’s American remake of House of Cards, which launches on Netflix in February, I revisit the original British potboiler and find that it still thrusts a steely rapier under the viewer’s skin.

At The Daily Beast, you can read my latest feature, "Rewind: BBC’s Iconic Political Thriller House of Cards Still Captivates," in which I reflect upon the legacy and vitality of 1990 British miniseries House of Cards, ahead of Netflix's American remake--premiering Feb 1 and starring Kevin Spacey, Kate Mara, and Robin Wright--from David Fincher and Beau Willimon.

Netflix, the now-ubiquitous digital streaming service, will enter the original programming arena with its upcoming American remake of House of Cards, from writer Beau Willimon (Farragut North) and director/executive producer David Fincher (The Girl with the Dragon Tattoo). The series, which launches Feb. 1, stars Kevin Spacey, Kate Mara, and Robin Wright in roles that are now as iconic as the British miniseries itself.

In many ways Netflix picked a stellar property to adapt as their first nonacquired original. The American House of Cards is, of course, based on the 1990 BBC political thriller miniseries of the same name—itself adapted by writer Andrew Davies from Michael Dobbs’s novel—which revolved around the Conservative Party’s chief whip, the Machiavellian Francis Urquhart, played to icy perfection by the late Ian Richardson.

More than 20 years after its release, House of Cards still manages to thrust a steely rapier under the viewer’s skin, its view of the hostile British political maneuverings of Urquhart and his kind both riveting and shocking. The overarching plot is simple: Urquhart—who is part spymaster, part enforcer, and wholly unpredictable and dangerous—is passed over for a cabinet position when his candidate for prime minister rises to power. Frustrated and seething, he sets out to destroy everyone in his path as he launches a chesslike battle to ascend to the highest seat in Her Majesty’s Government. Along the way, Urquhart meets an ambitious young journalist, Mattie Storin (Susannah Harker), and together they help each other achieve their ends, their partnership tinged with a particularly creepy psychosexual tension.

In Britain, House of Cards premiered on Nov. 18, 1990, playing out against the backdrop of the final weeks of Margaret Thatcher’s downfall and the succession of fellow Tory John Major to the seat of prime minister. With a clear sense of premonition, Thatcher’s fall from grace is even dealt with in the narrative. “Nothing lasts forever,” Urquhart says to a framed picture of Maggie Thatcher. “Even the longest and most glittering reign must come to an end someday.” (Even more emphatically, Urquhart—with a roguish smile—turns her picture facedown on his desk.)

Ronald Helfrich Jnr. said…
Not interested in the remake. The original was brilliant. Has Fincher become, along with that other metteur-en-scence Abrams, the master of the simulation?
1/28/2013