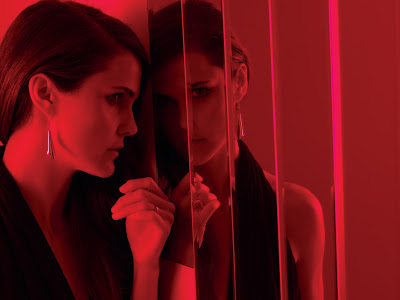 On FX’s The Americans, which begins Wednesday, Keri Russell plays a Soviet sleeper agent in 1980s suburban D.C. I talk with the former Felicity star about Russian spies, secret lives, and being a mom.

Donning a blond Pretty Woman-style wig and a short dress, Russell is nearly unrecognizable, convincingly transformed into a barfly who pretends to be turned on by a G-man’s security clearance. Elizabeth and her mark head to a hotel room, where she proceeds to seduce him in order to elicit top-secret information, engaging in a range of sexual contact that’s all recorded and later listened to by Elizabeth’s husband, Phillip (Matthew Rhys).

In other words, this is the anti-Felicity.

It’s January, and Russell sits demurely on a couch at the Langham Hotel in Pasadena. The 36-year-old actress is animated and excited, prone to waving her hands and pounding her fists emphatically on her knees while talking. It’s impossible to believe that it’s been more than 10 years since Russell played Felicity Porter on The WB’s beloved coming-of-age drama Felicity between 1998 and 2002. In the time since Felicity wrapped, Russell segued into a movie career, starring in the late Adrienne Shelly’s 2007 Sundance favorite Waitress, Mission: Impossible 3 (which reunited Russell with Felicity co-creator J.J. Abrams), and a slew of others. (A brief return to television, as the female lead opposite Will Arnett in Mitch Hurwitz’s 2010 Fox comedy Running Wilde, was short-lived.)

In person, Russell is warm and open, nothing like the character she plays on The Americans, which begins Wednesday night on FX. While she’s all high-waisted jeans and smiles on the surface—the perfect portrait of 1980s suburban motherhood who brings over home-baked brownies to her new neighbors—Elizabeth is, underneath, a brutal and unflinching killer who believes in the mission given to her and her “husband” by their Russian overseers.

It’s a bit ironic that Russell is now playing a spy. After Felicity, Abrams went on to create the Jennifer Garner-led ABC espionage thriller Alias, the idea for which grew out of a writers’ room discussion about what it would be like if Felicity became a spy. (Alias would make a star out of former Felicity guest star Garner and become an international hit.) But while Alias featured a spy who was one of the good guys, The Americans’ Elizabeth is anything but on the side of the angels.