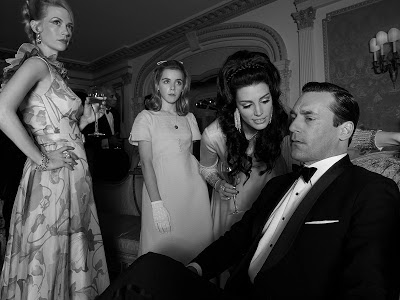 Mad Men returns on April 7! I talk with creator Matthew Weiner about what to expect from Season Six of the period drama, from a time jump to Don and Megan’s marriage.

Over at The Daily Beast, you can read my latest feature, "Mad Men: Creator Matthew Weiner Shares 10 Facts About Season 6," in which I talk to Mad Men creator Matthew Weiner about what lies ahead for Don Draper and the staffers of Sterling Cooper Draper Pryce in Season Six of AMC's Mad Men.

Hold on to your period-appropriate hats: AMC’s Mad Men will return for its sixth season on Sunday, April 7 at 9 p.m. with a two-hour premiere, the network announced today. (The Emmy Award-winning drama will settle into its regular time at 10 p.m. ET/PT the following week, with an episode directed by series star Jon Hamm.)

“To be able to continue exploring the stories of these characters for a sixth season is an amazing opportunity,” said series creator and executive producer Matthew Weiner in a statement. “We love mining this world and look forward to bringing the audience stories that we hope will continue to both surprise and entertain them.”

When we last saw Don Draper (Hamm) and his fellow partners at Sterling Cooper Draper Pryce, they were being tested by marital infidelity, objectification, and suicide, to name but a few of the crucibles Weiner and his writing staff put the characters through in Season 5. But the darkness that enveloped Don at the end of the season may not have dissipated just yet.

The Daily Beast caught up with Matthew Weiner yesterday to shed some light on what lies ahead for Don and Megan (Jessica Paré), newly independent Peggy (Elisabeth Moss), and our other favorites. Below are 10 facts, gleaned from The Daily Beast’s phone interview with Weiner, about Season 6.

This will be the second-to-last season of Mad Men.

Weiner, speaking to The Daily Beast yesterday, confirmed that Season 6 will most definitely be Mad Men’s penultimate season, with the show set to wrap after next season.

“I’m going to confirm that,” said Weiner, who added that having an end date helped shape the overall narrative of Season 6 quite a lot.

“I came in with my plan for the season,” he said. “I was like, ‘I want to save that for the last season, I want to save that; I want to wait on that’ and I was pulled aside by Maria and Andre Jacquemetton, my executive producers, who said, ‘Don’t do that. You’ve never done that before. Let’s just use all the story that we have and we’ll deal with it on the other side of it.’ It really helped. Because I don’t want to change—part of it is superstition and part of it is the only way I know how to do it.”