The Daily Beast: "Arrested Development Finally Gets a Release Date" 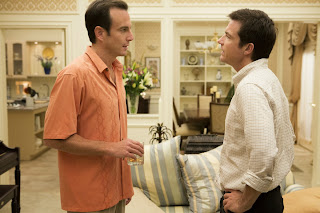 Netflix has finally announced a launch date for Season 4 of Arrested Development, the beloved cult comedy which the streaming platform has brought back to life.

Back up the stair car, there’s no need to be blue: Netflix has finally announced a return date for Arrested Development.

Mitch Hurwitz’s oddball comedy, which aired on Fox between 2003 and 2006 and revolved around the Bluth clan of Orange County, was resurrected last year by the streaming video provider, which announced today that it will release the fourth season of Arrested Development to subscribers on Sunday, May 26.

(That’s right, you can mark your calendars now: May 26 will be the day that the Internet will break in half.)

All 15 episodes of Arrested Development will be available to stream on the same day, beginning at 12:01 a.m. PT. The launch follows the rollout pattern established by the platform’s first original series, House of Cards, which launched with all 13 episodes in February, and that of its upcoming Eli Roth horror thriller, Hemlock Grove. Previous reports had the series launching with 14 episodes, but Netflix today confirmed a total order of 15 installments, a significant increase from the 10-episode order it gave the show in December. Each episode will unfold from a different character’s perspective, with several plotlines overlapping, giving the series—already known for inside jokes, callbacks, and formalizing what became known as the TiVo effect—even more of an interlocking puzzle feel.

Netflix had previously hedged its bets when it came to announcing a release date for Season 4 of Arrested Development; the May 26 date will allow the show to remain eligible for Emmy Awards consideration, which means that Netflix will likely be launching massive Emmys campaigns for this and House of Cards come the summer.