The Daily Beast: "Broadchurch: This British Murder Mystery Will Be Your Next Television Obsession" 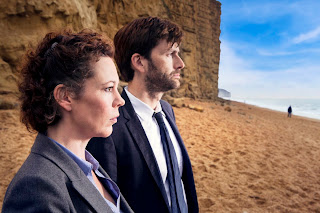 British murder mystery Broadchurch, heading to the U.S. later this year on BBC America, is a worthy successor to Forbrydelsen. My take on ITV’s tantalizing thriller, which wraps up tonight in the U.K.

Over at The Daily Beast, you can read my latest feature, "Broadchurch: This British Murder Mystery Will Be Your Next Television Obsession," in which I review ITV's sensational murder mystery Broadchurch, which stars David Tennant and Olivia Colman and which will head Stateside later this year on BBC America. Not to be missed!

The British have an insatiable appetite for crime fiction, whether it appears in print or on television screens. Putting aside the twee tea cozy mysteries of Agatha Christie’s Miss Marple or Hercule Poirot, however, these thrillers are not only taut but also bleak depictions of the psychological fallout from murder: tracing, as novelist Ruth Rendell has done so well in her work, how crime affects not just the victim, but also those left behind. Murder doesn’t just destroy a single life; it corrupts everyone with which it comes in contact.

ITV’s superlative murder mystery Broadchurch, which wraps up its eight-episode run tonight in the U.K. (it heads Stateside later this year on BBC America), explores just that, a gorgeously realized and emotive thriller that revolves around the murder of an 11-year-old boy, Danny Latimer (Oskar McNamara), in a seaside town on the Dorset coast, and the investigation by the police and the media to unmask his killer.

Created by Chris Chibnall, Broadchurch is, in many ways, a homegrown response to the riveting Nordic Noir television trend, which has captured the imagination of U.K. viewers in a very unexpected and palpable way. Like Forbrydelsen before it, Broadchurch focuses on both the police investigation—embodied here by churlish Detective Inspector Alec Hardy (David Tennant) and eager-to-be-liked Detective Sergeant Ellie Miller (Olivia Colman)—and how Danny’s family copes in the wake of such monumental grief. ITV’s Broadchurch—which was deemed “another jewel in the channel’s drama crown” by The Independent—has proven to be a huge success in its native Britain, luring in roughly 9 million consolidated viewers, putting it on par with the massively successful Downton Abbey.

Everyone is a suspect in Danny’s death, from the cheerful local vicar (Doctor Who’s Arthur Darvill) and the grizzled newsagent (David Bradley) to Danny’s own father, Mark (Andrew Buchan). Secrets have a way of spilling out in a murder investigation, and Broadchurch does a fantastic job of charting the numerous atomic explosions that follow in its wake. Everyone in the idyllic seaside town has something to conceal, something they’re running from, a terrible past that they’re looking to forget. Even Danny, the poor dead boy at the center of the story, seems to have harbored some terrible secret, one worth killing him over. Just what that is—and whodunit—remains the overarching plot that carries an electric current throughout the action.