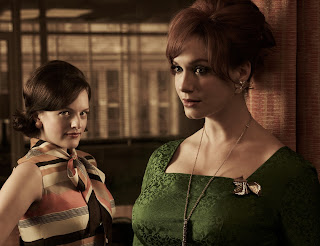 Can’t remember what happened to Don, Peggy, and Joan? Ahead of its sixth season premiere on Sunday, I bring you up to speed on what happened last season on AMC’s Mad Men. Plus, read our review of the Season Six premiere.

Over at The Daily Beast, you can read my latest feature, "Mad Men Returns: A Recap of Season Five," in which I round up all of the important plot points of Season Five of Mad Men in order to get you ready for Sunday's premiere.

Season Six of Mad Men begins Sunday evening at 9 p.m. with a stellar two-hour premiere, 10 long months since we last traveled back in time with AMC’s devastatingly elegant period drama.

In that time, your brain may have erased precious details about what happened to Don Draper (Jon Hamm) in the dentist’s chair, whether he and “Zou Bisou Bisou” chanteuse Megan (Jessica Paré) repaired their marriage or ended it, and just what Joan (Christina Hendricks) did in order to secure herself a seat at the partners’ table. What happened to Lane Pryce (Jared Harris)? Did Betty (January Jones) have cancer? Why isn’t Peggy (Elisabeth Moss) working at Sterling Cooper Draper Pryce anymore? What happened to Sally (Kiernan Shipka) at the museum?

Can’t remember the details of Season Five? Read on:

Don has married his former secretary, Megan, to whom he proposed after a trip with the kids to Disneyland at the end of Season Four. Megan now works as a copywriter at Sterling Cooper Draper Pryce, and Don seems happy to come to work in a way he didn’t before.

Newly relocated to a fabulous Manhattan apartment, Don and Megan have more of a spark than Don and Betty had. At a party, Megan serenades Don with a sexually charged rendition of “Zou Bisou Bisou” in front of his coworkers, something that makes him uncomfortable. They argue. The following day, as she angrily cleans up from the party, they engage in a sex game.

Don and Megan take a trip together, but their marriage hits the skids along the way. The two have a terrible row about orange sherbet, and Don leaves Megan in a Howard Johnson parking lot. He later has a sinking feeling, frantically calling the office in an effort to track her down. Don discovers Megan at home; he kicks down the door and menacingly chases her around the apartment, throwing her to the ground in their living room. His words? “I thought I lost you."

Megan single-handedly saves the Heinz account, but lets Don take the credit for the pitch. Her lack of enthusiasm is the precursor to a larger confession: she wants to quit her job and pursue acting again. Don nearly steps into an open elevator shaft at work, a brush with death that leaves him reeling.

Don spends an afternoon with Joan, test-driving a Jaguar and drinking together in a bar, reminiscing about the past. Arriving home late and drunk, Don is stunned when Megan angrily throws his dinner against the wall. The two lead increasingly separate lives. Megan lands a callback for a role in a play in Boston, which leads to yet another row between the two. They make up, but it’s clear that fissures are forming in their relationship.

Don has a "hot tooth" with which he is avoiding a confrontation. When he finally goes to see a dentist, he learns that he has an abscess: the tooth is rotten, threatening to overtake his jaw. In the dentist’s chair, he has a vision of his dead brother, Adam (Jay Paulson), a ghost whose presence occurs throughout the final episode.

Megan wants Don to help her snag an audition for a shoe commercial. Don vacillates but ultimately helps Megan, realizing that her failure will be his responsibility. On the commercial’s lavish set, she tells Don that she loves him, and they kiss, an emblem of their love set against a false façade. As he leaves her on the brightly lit set of the commercial—where she is playing Beauty of Beauty and the Beast—he is surrounded by the darkness of the studio, one that echoes the gloom within him. Don is then shown at a low-lit bar, where he's asked, "Are you alone?"

Roger is still married to Jane (Peyton List), though their passion has clearly evaporated, as seen from their sparring at Don and Megan’s party. Don is forced to hire an African-American secretary, Dawn Chambers (Teyonah Parris), after Roger takes out an ad in a newspaper—stating that they are an “equal opportunity” employer—as a joke against rival firm Y&R. When several applicants show up, Lane is forced to carve out funds from their budget to support one new position… so that the firm isn’t itself a recipient of angry protests, thanks to Roger’s “joke.” Later, Roger instructs Peggy to hire a Jewish copywriter, Michael Ginsberg (Ben Feldman), because having Jews and African-Americans makes SCDP seem more “modern.”