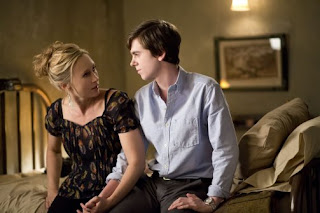 Windy sex scenes! Dumpster diving! Imaginary mommy meltdowns! Or as it says at the site: "A conflicted Jace Lacob and a hooked Anna Klassen debate the merits and flaws of A&E’s Psycho prequel, Bates Motel."

Over at The Daily Beast, you can read my latest feature, "The Great Bates Motel Debate: Sex Scenes, Mother Issues & Implausible Twists," in which Anna Klassen and I debate the merits and flaws of A&E's Bates Mote, which was recently renewed for a second season and approaches Season One's halfway point tonight.

A&E’s Bates Motel, the Psycho prequel overseen by Carlton Cuse (Lost) and Kerry Ehrin (Friday Night Lights), hasn’t just attracted an audience—4.5 million viewers tuned into the pilot. It has already been renewed for a second season of Oedipal strife between Norman Bates (Freddie Highmore) and his overbearing mother, Norma (Vera Farmiga), set against the backdrop of a seemingly idyllic Pacific Northwest logging town that hides more than a few secrets.

Sound familiar? The Twin Peaks allusions are very much intentional here, as is the ominous mood lingering over the action, which so far has seen Norma murdering a would-be rapist and covering up the crime, Norman discovering a human smuggling/prostitution ring, and Norma’s other son, Dylan (Max Thieriot), keeping watch over an enormous pot field. Not to mention that a local cop (Mike Vogel) may or may not have an Asian girl chained up in his basement.

As the halfway point of the first season approaches Monday night, The Daily Beast’s Jace Lacob and Anna Klassen debate Bates Motel’s pros and cons, as well as last week’s episode, “Trust Me,” which had both them scratching their heads.

JACE LACOB: I’m so conflicted about Bates Motel. I like it, but I don’t love it. And last week’s episode didn’t resolve my inner turmoil.

ANNA KLASSEN: I disagree. Bates Motel is a cleverly crafted show with complex characters. As we approach Episode 5, we have just begun to touch the surface of Norma and Norman’s relationship, but I am completely hooked and want to see more of their twisted family life unfold.

LACOB: Interesting. For me, Vera Farmiga is by far the best part of the show, but I feel like lately they’ve moved away from exploring the Norman-Norma dynamic. Which is fine, to a certain extent, as I’m intrigued by the Twin Peaks aspect of the show: that its own way White Pine Bay, Ore., is in concealing a dark underbelly of drugs, murder, and human trafficking. That’s interesting to me in the same way the denizens of Twin Peaks reflected the darker impulses of society. But we’ve gotten away from that too, as the show focuses more on Norman and Bradley, whose tumble in the sheets this week seemed really, really creepy to me. For one, Freddie Highmore looks like he’s 12 years old, but also it was just so...odd.