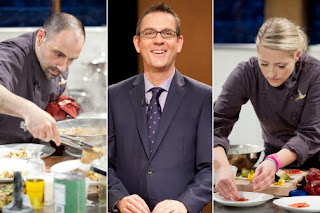 Food Network’s Chopped returns for its fifteenth season. I write about why sea cucumbers, speculoos, and lacinato kale--on the surface, ingredients which many of us have never heard of--matter.

At The Daily Beast, you can read my latest feature, "Chopped: Why I’m Obsessed with Food Network’s Reality Competition Show," in which I I write about my insatiable obsession with Food Network's Chopped, and how the competition show brings a deeper and richer awareness of food and culinary diversity to the public at large.

When the Food Network, the culinary-themed cable network available in approximately 99 million American homes and 150 countries around the globe, launched Chopped in 2009, no one could have imagined the eventual impact the show would have.

I was initially less than enthusiastic about Chopped—a culinary competition show featuring four chefs squaring off by cooking an appetizer, entrée, and dessert from various mystery basket ingredients—during the early part of its run. I complained about the under-lit sets, the under-enthusiastic judges, the under-utilization of knowledgeable foodie host Ted Allen. I compared it unfavorably to Bravo’s Top Chef, from which it had appeared to borrow its overall conceit.

Over time, Chopped course-corrected: the set now no longer looks like it’s perpetually twilight, and the judges—a selection of well-known and well-respected chefs and restaurateurs—are now very much engaged and invested in the action in front of them. As for host Ted Allen … well, I always wish the show’s producers would give him something to eat, or at least offer him a chair.

I came back to Chopped a few years ago to discover the show’s transformation from staid and predictably over-produced competition show into something more intriguing and rewarding: a show that celebrated the competitive nature of chefs and brought a level of awareness—of technique, of ingredients, of culinary passion and poise—to a wider audience than ever before.

Years ago, Food Network’s primetime lineup was overflowing with how-to cooking programs. In the late 1990s, you couldn’t flip on the channel without seeing Emeril Lagasse or Ming Tsai or Bobby Flay preparing a dish, step by step, for the viewers. There was even a live call-in program, Cooking Live Primetime, hosted by Sara Moulton, which often featured sommeliers and wine experts in the mix. It was approachable, accessible, and most definitely focused on viewers who understood food and its preparation.

Over time, the network subtly changed its remit; in more recent years, it is stocked with various culinary competition shows, programming that places the emphasis more on competition (whether it be cupcakes, elaborate cakes, chocolate structures, new program hosts, etc.) than the food, per se. It wasn’t necessarily food television for foodies, but rather escapist fare for people who might derive more enjoyment from watching people cook than cooking themselves. (A spinoff network, the Cooking Channel, was created in 2010 to service the latter group.)

Chopped, however, occupies a unique strata within the world of Food Network. It might, like its similarly themed brethren (the terrifying Sweet Genius, for example), be a reality competition show in the vein of Top Chef, but Chopped manages to be absolutely riveting television that educates, informs, and thrills at the same time.

Four chefs enter the kitchen; one is crowned the Chopped Champion at the end, having gone through three courses and no less than a dozen mystery ingredients, ranging from the mundane (leftover pizza) to the sublime (abalone). The clock is relentless as they churn out dish after dish, being judged on creativity, taste, and presentation. Egos flare, tempers simmer over, and occasionally true culinary genius and ingenuity is glimpsed.