The Daily Beast: "The Good Wife: Creators Robert and Michelle King on the Season Finale, Alicia and Kalinda, and More" 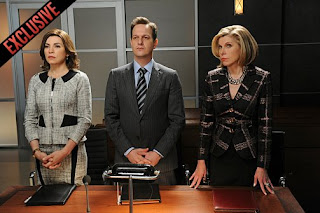 The season finale of The Good Wife was full of dramatic bombshells. I talk to creators Robert and Michelle King about rebooting the show, the start of a ‘civil war,’ Alicia and Kalinda’s dynamic, and what’s next. WARNING: Spoilers galore.

Over at The Daily Beast, you can read my latest feature, "The Good Wife Creators Tell All," an exclusive Season 4 postmortem interview with The Good Wife husband-and-wife creators Robert and Michelle King, in which we discuss the Alicia (Julianna Margulies)/Kalinda (Archie Panjabi) dynamic (or lack thereof), what really happened between Kalinda and Nick (Marc Warren), the year of Cary (Matt Czuchry), Robyn Burdine (Jess Weixler), and much more. (Seriously, it's a long interview and I had to cut a lot for space.)

The move effectively reboots the show, which will return for a fifth season in the fall. What will Alicia’s decision mean for her star-crossed romance with Will Gardner (Josh Charles) once he gets wind of her betrayal? And what does it mean for The Good Wife that its main characters are being split up and established as potential adversaries?

The Daily Beast caught up with The Good Wife creators Robert and Michelle King to discuss the love triangle between Alicia, Will, and Peter; the shifting dynamic between Alicia and legal snoop Kalinda Sharma (Archie Panjabi); new investigator Robyn Burdine (Jess Weixler); whether Kalinda is a murderer; audience backlash to the Nick (Marc Warren) storyline; and much more. What follows is an edited transcript of the conversation.

The Good Wife has mined the pull between idealism and ambition throughout its run. How does Alicia's “I'm in” represent the outcome of that battle?

Robert King: Alicia could have fought her way to the top of Lockhart/Gardner, given that she had been made partner. To us, it was a little bit more of a personal decision, because of the feeling that she could not control her sexual attraction to Will; their proximity was a problem. Yes, there's an element of what Cary is saying, which is, “We could be the new Diane and Will,” and there is ambition there. But it's joined together with the fact that she feels the only way to stop from being adulterous would be to leave Lockhart/Gardner. That sweet spot for the show that we enjoy so much is where the personal and professional combine.

Should it matter that it's Colin Sweeney's involvement that sways her? Has she in some ways made a deal with the devil?

Michelle King: Apparently, there's a difference of opinion in the King household. I don't think it's relevant. She would have done it either way. It didn't matter that Sweeney was pushing her to do it.

Robert King: In many ways, Alicia wants to feel that she can do Lockhart/Gardner right. And yet, when you start with Colin Sweeney and Bishop and Chum Hum as clients, you are already starting off with a step in the wrong direction.