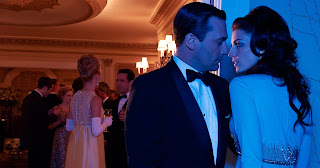 Mad Men’s Don Draper returns for his penultimate season on AMC Sunday—and he’s as down in the dumps as ever. I write about the dark mood hovering over the show’s brilliant sixth season.

Over at The Daily Beast, you can read my latest feature, "Mad Men Season 6 Review: Triumphant, Lyrical, and Way Existential," in which I review the fantastic sixth season premiere of AMC's Mad Men, which returns on Sunday at 9 p.m. for its penultimate season: "Don isn’t so much a person as a reflection, a shadow, the wet ring left on a bar by a glass of Scotch."

It’s tricky enough to write about a show without delving into the plot mechanics, and even more so when you can’t even touch upon certain aspects of the plot in even a cursory way. But that’s always been the case with AMC’s Mad Men, which returns for its sixth—and penultimate—season on Sunday at 9 p.m.

Creator Matthew Weiner wants to ensure that even the most quotidian of details about the plot remain concealed. Members of the press who received an advance copy of the two-hour season premiere were instructed not to reveal several elements about the new season, a detailed list of plot points that are considered verboten. Those restrictions make writing about Mad Men’s beautiful and bravura Season 6 opener (“The Doorway”)—gorgeously written by Weiner and directed by Scott Hornbacher—a minefield of potential missteps, but fortunately not entirely impossible to navigate.

The title is a clue to what is at play within Mad Men’s ambitious sixth season. Doorways are, of course, both a means of entrance and exit, and how you see this portal depends a lot on your state of mind at the time. Are we coming or going? Or, in an existential sense, aren’t we all always coming and going, the world forever on that inexorable loop of birth and death? Issues of mortality carry over from the brilliant (if somewhat polarizing) fifth season, which saw all manner of death imagery swirl around Don Draper (Jon Hamm) and the staffers at Madison Avenue ad agency Sterling Cooper Draper Pryce. This emphasis on the transitory nature of life—embodied in last season’s suicide of Lane Pryce (Jared Harris)—looms still over Season 6.

If we are forever on that trajectory—from the womb to the grave—what matters most is perhaps how we spend the time we have, and what we make of ourselves. But for Don Draper, the quick-change chameleon ad man, identity is something fluid and fraught. An admonition to “be yourself” results in nothing but confusion. Who is Don, really? It’s a question that has been posed time and time again throughout the first five seasons of Mad Men, and one that he often answers through the relationships with the women in his life: first wife Betty (January Jones), daughter Sally (Kiernan Shipka), and his latest wife, actress Megan (Jessica Paré). Don isn’t so much a person as a reflection, a shadow, the wet ring left on a bar by a glass of Scotch.