The Daily Beast: "Sundance Channel’s Rectify is the Best New Show of 2013" 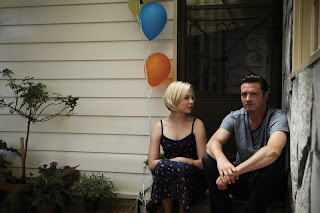 Sundance Channel’s ‘Rectify,’ which begins on Monday, is a weighty meditation on crime, punishment, beauty, and solitude. It is also insanely riveting television.

Over at The Daily Beast, you can read my latest feature, "Sundance Channel’s Rectify is the Best New Show of 2013," in which I review Sundance Channel's Rectify, which begins Monday and which I name the best new show of 2013: "With Rectify, McKinnon creates a world of light and darkness, and of heaven and hell, one that exerts a powerful gravity from which it is impossible to escape."

Sundance Channel, the indie-centric network that is closely aligned with corporate sibling AMC, is quickly ascending to a place of prominence in an increasingly fragmented television landscape. For the longest time, the network was identifiable as the home of independent films, repeats of Lisa Kudrow’s short-lived HBO mockumentary The Comeback, and some forgettable reality fare. It lacked a cohesive programming identity and existed within the same hazy hinterlands as IFC.

But in the last year, Sundance Channel has found itself in the white-hot spotlight normally reserved for AMC—home of Mad Men, Breaking Bad, and The Walking Dead—thanks to a slew of high-profile and critically acclaimed shows, like the gripping paraplegic unscripted series Push Girls, Jane Campion’s haunting mystery drama Top of the Lake, and now Rectify, a six-episode drama that begins Monday.

The network’s first wholly owned original series, Rectify, created by Ray McKinnon, is exactly the type of show that would have once aired on AMC. (Ironically enough, it was originally developed for the channel.) It’s a breathtaking work of immense beauty and a thought-provoking meditation on the nature of crime and punishment, of identity and solitude, of guilt and absolution. It is, quite simply, the best new show of 2013.

Sentenced to die for the rape and murder of a 15-year-old girl, Daniel Holden (Aden Young) is released from prison after 19 years, when his original sentence is vacated, due to new DNA evidence that was overlooked at the time of his original trial. Thanks to the persistence of his headstrong sister, Amantha (a perfectly flinty Abigail Spencer), and his lawyer, Jon Stern (Luke Kirby), Daniel returns home to his mother (True Blood’s J. Smith-Cameron) and to a world he hasn’t seen since he was a teenager. In the small town of Paulie, Georgia, Daniel must rediscover a life forgotten and distant, while outside forces look to demonize him and swing the executioner’s axe once more.

I watched the six-episode first season of Rectify with the sort of rapt attention one usually reserves for high-end television dramas these days, but with one distinct difference. Like Top of the Lake before it, I watched Rectify in two sittings, eagerly speeding through these six episodes with almost beatific devotion. I don’t want to call that “binge watching,” because binge has a rather negative connotation (it implies that you should, perhaps, feel guilt for overindulging). Instead, I see it as “holistic viewing,” attempting to judge the work on its complete form, rather than on just its individual parts.