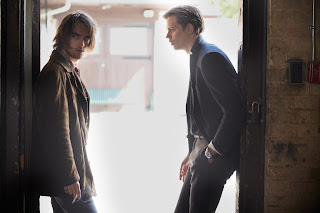 Netflix will today offer all 13 episodes of its latest original series, Eli Roth’s horror drama Hemlock Grove. My take on how Netflix has stumbled with this poisonous fare.

At The Daily Beast, you can read my latest feature, "Hemlock Grove: Netflix’s Latest Original Show Is Scary Bad," in which I review Netflix's newest original series, Hemlock Grove, which is not only nonsensical and almost unwatchable, but also could signal a misstep for the streaming video platform. (A sample quote: "Roman’s mother, Olivia, played by Famke Janssen as though she is channeling Madeleine Stowe’s Victoria Grayson through a hazy, upside-down kaleidoscope, is some sort of supernatural creature as well, her darkness symbolized by her haughty indifference, cut-glass English accent, and penchant for wearing black lingerie.")

Netflix has recently had a rather simple mandate: to fund their own original series under the auspices of well-known creative talent and use their streaming video platform—which is now ubiquitous in households around the world—as a dynamic delivery mechanism, offering every episode on the same day. No more waiting, no more timeslots, and no more viewer fatigue; in fact, the technique removed any sense of delayed gratification, playing to viewers’ innate need to binge and “just watch one more.”

This scheme worked quite effectively with David Fincher’s remake of the British cutthroat political drama House of Cards, which launched on Netflix in February and received much critical adulation. (The company is prepping for an Emmy awards campaign, in fact.) Numerous media stories were written about the binge-watching movement and whether Netflix’s model would make the broadcast and cable networks cower.

Not yet, anyway. Ahead of next month’s return of Arrested Development, the company today launches its second original series, the bizarre horror drama Hemlock Grove, from creators Brian McGreevy and Lee Shipman. (It’s based on McGreevy’s 2012 novel of the same name.) As with House of Cards, all 13 episodes of Hemlock Grove are available to stream today. Which means, if you get hooked while watching the first episode today, you can call in sick to work and plow through the entire season.

With Hemlock Grove, however, that seems unlikely to happen. Fincher’s House of Cards, with its serpentine protagonist, stellar cast, and compelling plot, established Netflix as a major player in the original series arena, a gladiator competing with the legacy networks and the upstart cable channels. It felt like a paradigm-shifting enterprise that unfolded before our eyes and threw off the shackles of cable providers and outmoded ratings systems. But with Hemlock Grove, one can’t shake the feeling that the streaming video goliath has effectively stumbled.

Hemlock Grove, unfortunately, is absolutely dreadful. The Eli Roth-directed drama is an almost unwatchable muddle of horror tropes and painfully creaky dialogue. The show is set in an eerie Pennsylvania town that is equal parts Twin Peaks; Twilight’s Forks, Washington; and Buffy the Vampire Slayer’s Sunnydale. The brutal murder of a high school student puts the entire town on edge, particularly since it appears that she was ripped apart by a wild animal while en route to a lesbian encounter with her teacher. Two suspects in her killing quickly emerge: Peter Rumancek (Terra Nova’s Landon Liboiron), a Gypsy who the local kids believe to be a werewolf because of his “quite excessive body hair,” and cherub-faced teenage playboy Roman Godfrey (Bill Skarsgård), who isn’t a werewolf but is… something else.