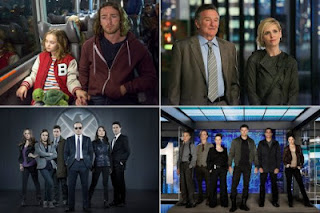 The broadcast network upfront presentations are over. Jace Lacob on the 51 new scripted shows heading to television next season. What will you watch?

At The Daily Beast, you can read my final upfronts post, "2013 TV Upfronts Wrap-Up: Bring On the New Television Shows," in which I wrap up our broadcast network upfronts coverage and take a look at the 51 new scripted series heading to ABC Television Network, CBS, NBC, FOX, and The CW for the 2013-14 season.

The upfront presentations are (finally) over.

Now that the dust has settled, it's easier to get a larger picture of what's going on for next season. The numbers: 51 scripted series have been ordered by the broadcast networks for the 2013–14 season. There are 29 new dramas for next season and 22 comedies. Thirty-one shows will launch in the fall, and 20 are being held for a later date, should some of the fall offerings fail to enflame the public's imagination. On the network level, ABC picked up 12 new scripted series; CBS ordered eight; NBC issued series pickups to 14, while Fox did the same for 12 scripted series. The CW claimed five new scripted shows.

ABC picked up a slew of pilots, including a Rebel Wilson sitcom Super Fun Night, and issued a series order to The Avengers spinoff series, Marvel’s Agents of S.H.I.E.L.D. CBS ordered several pilots, including a Sarah Michelle Gellar–Robin Williams comedy from David E. Kelley, Josh Holloway–led cyberprocedural Intelligence, and Hostages, a political conspiracy thriller starring Toni Collette, among others. NBC ordered a bunch of pilots, including J.J. Abrams’s supernatural drama Believe (which will feature Twin Peaks's Kyle MacLachlan), an adaptation of Nick Hornby's About a Boy, and global conspiracy thriller Crisis, from creator Rand Ravich, to name a few.

Elsewhere, Fox ordered a handful of pilots, including: J.J. Abrams’s futuristic police drama Almost Human; Sleepy Hollow, a modern-day update of Washington Irving's classic thriller; cop drama Gang Related, starring Lost’s Terry O'Quinn and RZA; and legal drama Rake, a remake of an Australian drama which will star Greg Kinnear. The CW ordered a remake of 1970s British science-fiction drama The Tomorrow People, a period drama following Mary Queen of Scots called Reign, and an interspecies sci-fi/romance drama called Star-Crossed, along with a spinoff of The Vampire Diaries and an adaptation of The 100.

The odds are not in these new shows' favor, however: many of these new shows will fail, and some—the networks hope, anyway—may succeed to see a second season (or longer, if they're truly lucky).