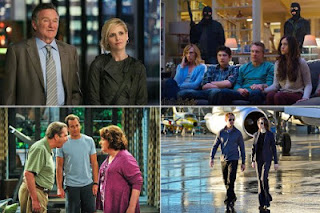 CBS's 2013-14 schedule is here, and it's largely the same, save moving Hawaii Five-0 to Friday and Person of Interest to Tuesday, while Mike & Molly returns in midseason.

At The Daily Beast, you can read my latest upfront post, "CBS Announces 2013-14 Primetime Schedule," in which I explore the new primetime 2013-14 schedule at CBS, recount some of what CBS Entertainment President Nina Tassler said to reporters at the network's traditional press breakfast, and offer up some quick thoughts on the changes to the schedule.

CBS on Wednesday drew back the curtain to reveal its 2013-14 primetime schedule during its traditional breakfast with reporters ahead of its official upfront presentation at Carnegie Hall.

Stability seemed to be the rationale behind CBS's primetime schedule, which returned pretty much intact with a few notable exceptions: Hawaii Five-0 will move to Fridays at 9 p.m., in order to take over the timeslot left vacant by the cancellation of CSI: New York, and Mike & Molly is being held until midseason.

Eliminating the lull of repeats, was one of the network's key strategies for the 2013-14, which will see four new comedies and two dramas (one for fall and one for midseason) join the schedule.

"Comedy was a priority for us," CBS Entertainment President Nina Tassler told reporters. "We shot 23 pilots this year… and our studio really delivered a lot of great content… With comedy, you rely on chemistry and all the right elements coming together at the right time. The shows reflect a perfect alchemy."

As for drama, "there are some departures for us, in terms of genre and the new faces you’re going to see," Tassler said. "The goal this year was to have more originals, fewer repeats."

To that end, returning comedy Mike and Molly isn't on the schedule right now but will return in midseason with 22 episodes in order to ensure that there are more originals and less repeats throughout the season. "We have this show ready to air in midseason," said Tassler. "Melissa's popularity continues to grow. She'll be even more popular when we air this." Also turning up halfway through the season: James Van Der Beek-led comedy Friends with Better Lives and sultry Southern soap Reckless will also turn up later down the line.