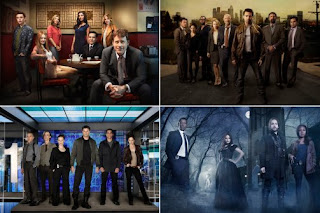 Fox has revealed its 2013-14 primetime schedule. My take on the changes afoot at the broadcast network next season, including the launch of 24: Live Another Day.

Over at The Daily Beast, you can read my latest feature, "Fox Unveils 2013-14 Schedule: 24 Returns, Sleepy Hollow and Almost Human to Mondays," which includes full details on FOX﻿'s 2013-14 primetime schedule, including comments from Kevin Reilly on the return of 24﻿ and much more.

On Monday morning, Fox unveiled its primetime schedule for the 2013-14 season, which included several changes to its current lineup and the confirmation of rumors that 24 will be returning to the network.

Fox Entertainment Chairman Kevin Reilly confirmed the news earlier today on a conference call with members of the press. 24 will return in early May as tentpole event drama 24: Live Another Day, which will "arc through the summer." Speaking on behalf of 24 executive producer Howard Gordon, Reilly said that Gordon had asked himself, “'Why are we killing ourselves trying to crack a feature when this is the perfect format?'” The spine of the proposed 24 feature film occurred over the course of 12 hours and translating the thrust of the film to television was "so liberating for us." The decision will allow the show's producers to take what they saw as the best of the 12 hours and translate for television.

"We’ll still go in chronological order, but we will skip hours," said Reilly. "It will be dictated by the plot.” Details are still coming together, but expect some high-wattage stars for the rebooted 24: "We’re getting just about a Who’s Who of Hollywood wanting to participate in this," Reilly said. And it's possible that this reboot, given what Reilly calls its "franchise-ability," could spur further sequels down the line. "There could be sequels," said Reilly. "I don’t know if it could be yearly," but possibly 18 or 24 months later, should it score with viewers.

(Following the press call, Reilly added a few additional remarks about the launch of 24: Live Another Day. “It’s great to have Jack back," he said in a prepared statement. "24 redefined the drama genre, and as we reimagine the television miniseries, this iconic show will again break new ground for the network. The series remains a global sensation, and everyone at Fox is thrilled to be back at work with Kiefer, Howard and the incredibly creative 24 team.”)

Glee, which was renewed for two more seasons, will be benched in midseason in order to accommodate new drama Rake, starring Greg Kinnear, which will take over the musical-drama's timeslot on Thursdays at 9 p.m. Fox intends to keep its comedy programming block on Tuesdays, which will see female-skewing comedies New Girl and The Mindy Project staying put at 9 p.m., leading out of new (and much more male-centric) comedies Dads and Brooklyn Nine-Nine at 8 p.m. However, in "late fall," Bones will move to Fridays at 8 p.m., where it will be joined by a new hour-long Friday night comedy block consisting of returning comedy Raising Hope and new comedy Enlisted.

"We had some challenges this season," Reilly told reporters on a press call early Monday morning. "Next season, we’ve got the Super Bowl… and we’re making the biggest investment of entertainment programming that we’ve ever made at Fox," including "two new event series franchises, the first of which will be going into production for 2014."