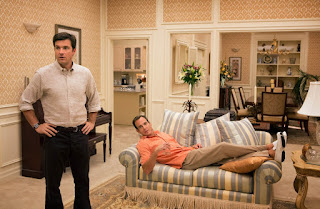 Fans eagerly awaited the return of Arrested Development, brought back from the TV graveyard by Netflix. Jace Lacob on why the show’s fourth season revival falls flat.

If you have an Internet connection, you know Arrested Development returned from the dead on Sunday, with all 15 episodes of the show’s fourth season available on Netflix on the same day.

This strategy falls in line with the other original series rollouts that the streaming platform has launched this year, from House of Cards to the abysmal Hemlock Grove, given the belief that Netflix wants to offer the viewer “choice” as to how it consumes content: will you watch just one episode or will you binge on the entire season, watching anywhere from eight to 13 hours of television in a single day or weekend?

There’s something to be said for choice, but there’s also something to be said for restraint on the part of the viewer. The to-binge-or-not-to-binge internal conversation may be happening only in social media-obsessed households, where FOMO (Fear of Missing Out) trumps the time commitment necessary to stay ahead of everyone else you know. I previously compared binge-viewing to eating a bag of potato chips, but I also think that there’s an unintended consequence of such behavior: the viewing purge. This doesn’t happen with typical episodic television, where there is time between installments to consider, analyze, and evangelize about the show you’re watching. Typically, there is time to engage in conversation with fellow viewers, whether that be at that perpetual cliché of office conversation, the watercooler, or a virtual one on Twitter or Facebook. Television, after all, is meant to be a communal activity, an experience that is shared and ongoing, whose conversation twists and bends as the season goes on.

That’s not the case with Netflix shows, which—thanks to the binge-viewing phenomenon—the conversation around appears limited to a narrow timeframe immediately after the release of the full season. Sure, there will be people who will watch weeks or months down the line, but the volume of the conversation is highest during those first few days, where people take to Twitter to share quotes, discuss plot elements, or share their progress.

So when Netflix released all 15 episodes of Arrested Development on the same day, the company clearly intended to have the show follow the same patterns as its previously released fare, knowing that the diehards would devour all 15 episodes while others would look at Netflix as a time-released delivery system, choosing when and where to watch an episode.

The show may prove to be a ratings success for Netflix (though the company will never disclose viewing figures), being was one of the most highly anticipated television events of the year, but the problem is, creatively, Season 4 of Arrested Development isn’t very good.

Anonymous said…
This season was great. Not as good as seasons 1&2 but better than 3. I also appreciate not having to wait a week for a new episode. Only losers with no other social life want weekly episodes for something to talk about by the water cooler or gay Twitter. How about you do something useful with your life so you'll have other things to talk about than what happened this week on arrested development.
5/27/2013