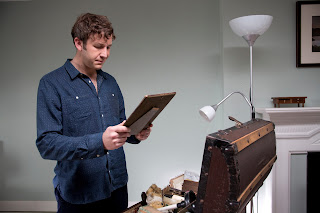 He pioneered the mockumentary on film. Now Christopher Guest is bringing his latest comedy, HBO’s Family Tree, to a TV landscape crowded with the format. My take on whether he succeeds.

At The Daily Beast, you can read my latest feature, "Family Tree Brings Christopher Guest’s Mockumentary Style to HBO," in which I review HBO's latest comedy, Family Tree, which begins Sunday evening, and which stars Chris O'Dowd (The IT Crowd) and hails from the fertile mind of co-creator Christopher Guest (Best in Show, Waiting for Guffman, A Mighty Wind).

Over the last few decades, the mockumentary format has become almost totally synonymous with Christopher Guest, the writer/director (and often actor) best known for films such as This Is Spinal Tap, Best in Show, Waiting for Guffman, A Mighty Wind, and For Your Consideration. Each film—to varying success—mined the documentary format for laughs, setting up its eccentric characters as the butts of the joke ... or the only ones in on it.

It’s no surprise, then, that Guest would eventually seek to bring his brand of comedy to television, which has had significant success with the format: numerous comedies, from Modern Family to The Office and Parks and Recreation, have embraced the single-camera mockumentary format, allowing for characters to engage in “talking heads” segments in which they speak directly to the audience via an unseen film crew. It’s through this technique that characters are able to comment on what the viewer has just seen or will see, an act that creates an instantaneous and perpetual sense of intimacy. That rapport, in essence, sets up the audience as an additional, unseen character in the room, removing the narrative distance between the action and the viewer at home.

With Guest and Jim Piddock’s semi-improvised genealogy comedy Family Tree, which begins its eight-episode season this Sunday evening on HBO, the television mockumentary format may be reaching oversaturation. But for Family Tree, the result is nonetheless appealing, what I like to call “tea-cozy television”—nothing too precious or too taxing, but comforting to watch all the same.

The show, which features a slew of familiar faces from Guest’s previous film work, revolves around sad sack Tom Chadwick (Bridesmaids’ Chris O’Dowd), who has, in rapid succession, lost both his job and his girlfriend. Cuckolded and on the dole, Tom flounders until he receives an unusual bequest from his Great-Aunt Victoria: a mysterious box containing ephemera from his family’s complicated history. Rather than see the box as full of rubbish, he chooses to see it as an invitation to a quest: to reconstruct his family tree and come to terms with the Chadwick clan’s rather checkered past (and, one imagines, his own in the process).