The Daily Beast: "The Dark Lure of Gillian Anderson's The Fall" 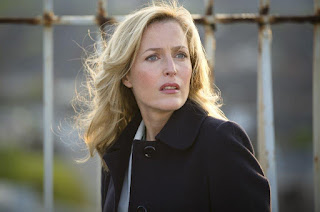 BBC Two’s The Fall, starring Gillian Anderson and Jamie Dornan, debuts on Netflix on May 28. My take on Anderson and Dornan’s searing performances and why you need to watch.

At The Daily Beast, you can read my latest feature, "The Dark Lure of Gillian Anderson's The Fall," in which I review BBC Two's serial killer drama The Fall, which stars Gillian Anderson and which makes its Stateside debut next week on Netflix.

It is virtually impossible to talk about The Fall—BBC Two’s addictive and provocative serial killer drama, which begins streaming stateside on Netflix on May 28—without mentioning the ghost in the room: Prime Suspect.

The allusion to Prime Suspect, a massive hit on both sides of the Atlantic, is well founded. For one, The Fall is the closest that television has come to capturing the taut alchemy of Prime Suspect: part police chase, part psychological portrait of the hunted and the hunter. At the time of its premiere in 1992, Prime Suspect captured the institutional misogyny of the Metropolitan Police and placed at its center Helen Mirren’s Jane Tennison, a knife-sharp detective who wasn’t content to hover at the edges of a “man’s world.” Over the seven seasons that Mirren portrayed Jane, viewers came to see her as a brilliant, if flawed, protagonist, who somehow remained tethered to the glass ceiling that she had shattered and who turned to drink and sex to dull the loneliness of her life.

In The Fall, we see both the hard road that Mirren’s Tennison had to walk but also the women—both fictional and real—who followed Tennison’s path in the 22 years since she first appeared on screen. Detective Superintendent Stella Gibson, played here with precision and grit by Gillian Anderson (The X-Files), joins this tradition as a confident and headstrong copper who flits between steely logic and rational detachment. To call her emotionless is to miss the point: Anderson’s Stella has real and vivid emotions, often deeply so, but she’s far more calm and rational than her male colleagues, a capricious and sensitive lot who can dodge bullets but can’t avoid wounded egos.

Created by Allan Cubitt (who not surprisingly cut his teeth on Prime Suspect 2), The Fall is a top-flight mystery that taps into political tensions in Northern Ireland and the troubling undercurrent of violence against women. Stella Gibson, a Metropolitan Police detective from London, arrives in Belfast to conduct a 28-day review of a high-stakes investigation into the murder of a professional woman who was found strangled in her home, her body artfully posed in her bed. What Stella—an out-of-place Englishwoman—discovers is that Belfast is far from peaceful, with the locals’ simmering rage constantly threatening to boil over into violence, and that this crime may be connected to another unsolved murder. The Police Service of Northern Ireland (PSNI) has stumbled upon a string of murders perpetrated by a killer who has the same level of precision and dedication to his own craft as Stella does to hers.