The Daily Beast: "NBC Unveils Its 2013-14 Schedule: Parenthood to Thursday, Revolution to Wednesday, and More" 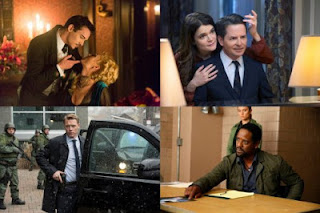 I examine NBC’s fall and midseason 2013-14 schedule, which shifts around a lot of returning shows. Plus, watch trailers for The Black List, Ironside, and more.

Over at The Daily Beast, you can read my latest feature, "NBC Unveils Its 2013-14 Schedule: Parenthood to Thursday, Revolution to Wednesday, and More," in which I offer full details on NBC's 2013-14 primetime schedule, complete with video trailers for their new fall dramas and comedies (sadly, the network isn't releasing the midseason trailers that they showed at today's upfront yet), thoughts, and reactions.

On Sunday, NBC unveiled the sweeping changes hitting its 2013-14 primetime schedule, which includes several night and time changes to pre-existing shows: Parenthood will move to Thursdays at 10 p.m., following the network's traditional two-hour block of comedies (though there was no word on when Community would be returning to the lineup), Chicago Fire will get relocated to Tuesdays, and freshman hit Revolution will be moving to a new Wednesday programming block with an emphasis on dramas, including Law & Order: SVU and the new Ironside reboot.

Those aren't the only changes afoot at NBC, however. Critical darling Parks and Recreation will move to 8 p.m. on Thursdays, while The Biggest Loser will move to Tuesdays at 8 p.m.

Elsewhere, two of the potentially strongest new entries, J.J. Abrams' Believe (pictured above) and Rand Ravich's Crisis, are being held for midseason launches. Also on tap for midseason: Crossbones and comedies About a Boy and The Family Guide.

“The overriding strategy this year was to develop enough strong comedies and dramas to take advantage of the promotional heft of the Winter Olympics and devise two schedules for the upcoming season: one for fall and a slightly different one for midseason," said NBC Entertainment Chairman Robert Greenblatt in a prepared statement. "I’m pleased to say that our development groups—headed by Jennifer Salke (scripted) and Paul Telegdy (alternative/reality)—really delivered. This is the most robust and highest-testing slate of new shows we have had in years.”

“And aside from our Olympics planning, we also wanted to create better flow and compatibility on each night," he continued, and deploy our strongest lead-in (The Voice) to maximum effect."

Read on for a look at NBC's new primetime schedule for fall and midseason 2013-14 and read what Greenblatt had to say about each night. Details for each of NBC's new shows can be found here.)