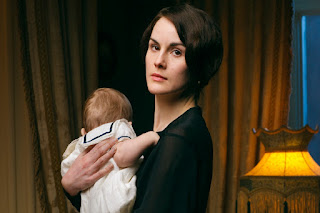 PBS sets a January return date for the fourth season of Downton Abbey, and announces the return of Call the Midwife and the launch of dramedy Last Tango in Halifax.

At The Daily Beast, you can read my latest feature, "Downton Abbey Season 4 Sets PBS Return Date," in which Masterpiece executive producer Rebecca Eaton talks about the return of Downton Abbey, which has (finally) set a U.S. return date in January 2014.

American fans of the Crawley clan can finally mark their calendars: Season 4 of Downton Abbey will kick off on PBS' Masterpiece Classic on Sunday, January 5, 2014.

Masterpiece executive producer Rebecca Eaton announced the official U.S. airdate for Season 4 of the award-winning period drama Tuesday at the PBS Annual Meeting. Downton's fourth season will run for eight weeks, from January 5 to February 23, 2014, roughly the time timeframe as its third season, which aired in the U.S. earlier this year. (In the U.K., Season 4 will air this autumn on ITV.)

"Masterpiece fans will not be disappointed: Julian [Fellowes] has done another brilliant job," Eaton wrote in an email to The Daily Beast, "this time, portraying the Downton family moving on from the tragedies of last season."

Those tragedies include the death of heir Matthew Crawley (Dan Stevens) and youngest daughter Sybil (Jessica Brown Findlay). The duo—along with Siobhan Finneran (who played devious maid Miss O'Brien)—will not be returning for a fourth installment of the Julian Fellowes-created Downton Abbey, the highest-rated drama in PBS history. A stunning 24 million total viewers tuned into Season 3 of Downton Abbey, and finale on February 17, 2012 was the top-rated show on television for the evening, beating all primetime broadcast and cable programming.