The Daily Beast: "The CW Reveals Its 2013-14 Primetime Schedule: Hart of Dixie to Monday, Supernatural to Tuesday, The Carrie Diaries to Friday" 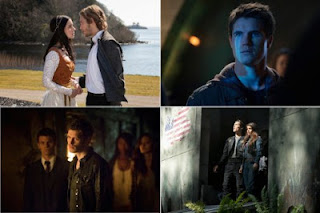 I examine The CW's 2013-14 primetime schedule, which includes five new dramas and moves around returning shows (Supernatural, The Carrie Diaries, Hart of Dixie) across the week.

At The Daily Beast, you can read my latest upfront report, "The CW Reveals Its 2013-14 Primetime Schedule," in which I take a look at The CW's fall schedule. (Videos and comments from Mark Pedowitz tk.)

The CW took the wraps off of its 2013-14 primetime schedule on Thursday morning, marking the final day of the broadcast network upfronts.

Among the changes afoot at the nearly seven-year old network: Hart of Dixie and Beauty and the Beast are moving to Mondays, Supernatural moves to Tuesdays, and The Carrie Diaries gets pushed to Fridays at 8 p.m. Nikita, which will have its final season of a six episodes, will be held until midseason. The network ordered five new dramas for next season, which will be scattered throughout Tuesdays (The Vampire Diaries spin-off The Originals), Wednesdays (The Tomorrow People), and Thursdays (period drama Reign) when The CW begins its fall season in October. Two additional dramas—Star-Crossed and The 100—will be held until midseason along with newly ordered reality show Famous in 12; their timeslots are still to be determined.

“We had a terrific season last year, growing our audience on-air, digitally and socially," said The CW President Mark Pedowitz in a statement. "Now we are building on that success by continuing to add more original programming all year long, and by adding high-concept, exciting shows to our schedule that will help us continue our mission of broadening out our 18-to-34-year old audience. Arrow was one of the breakout hits of this season, and we’re using that show and The Vampire Diaries, our two highest-rated series, to launch our new dramas The Tomorrow People and Reign, on Wednesday and Thursday nights."