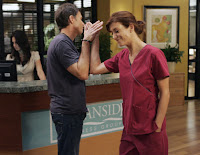 Welcome to your Monday morning television briefing. I hope you all tuned in to the launch of HBO's new comedy series Summer Heights High; I've already seen the series several times but tuned in once again (it's just that funny) and also caught upon Skins (how cute was Chris' drawing of him and Jal?) and The Amazing Race.

Kate Walsh's Addison Montgomery will return to Seattle Grace... at least as part of a multiple-episode crossover story between Grey's Anatomy and Private Practice that's scheduled to air during February sweeps. (TV Guide)

FOX has delayed the start of animated comedy The Cleveland Show, a spinoff of Family Guy, until next fall. But the network has also ordered an additional nine episodes for Cleveland, bring its episodic total to a full 22 for the 2009-10 season. If that weren't enough Cleveland-centric news, Arianna Huffington has been added to the cast. (Variety)

Less than four months after premiering, NBC's Knight Rider is already undergoing some major retooling, beginning with its tenth episode, scheduled to air in January. Among the changes to the series, look for original cast members Sydney Tamiia Poitier, Yancey Arias, and Bruce Davison to depart; the troika's options were not picked up beyond the original 13-episode order and the series will focus instead on the five core characters (Mike, Sarah, Billy, Zoe, and KITT). "It's a reboot," said executive producer/showrunner Gary Scott Thompson. "We're moving away from the terrorist-of-the-week formula and closer to the original, making it a show about a man and his car going out and helping more regular people, everymen." (Hollywood Reporter)

Ricky Gervais said he would like to appear in the American version of The Office and has suggested that he play Extras' struggling actor Andy Millman. (TV Guide)

Showtime and BBC are developing a contemporary retelling of Camelot with Michael Hirst and Morgan O'Sullivan (The Tudors) writing an executive producing Camelot with Douglas Rae. Showtime and BBC are co-financing the development of the scripts and, should the project be ordered to series, it would be produced by Eccose Films and Octagon Filmes. (Variety)

ABC has announced the return of Lost. Season Five will kick off on Wednesday, January 21st in a special three-hour event, with Lost premiering in its new official timeslot of 9 pm ET/PT the following week. (Televisionary)

Michael Rapaport (Prison Break) has signed a development deal with CBS under which he will develop, star in, and produce an untitled drama project for the network. Said project, to be written by Bryan Goluboff (Basketball Diaries) and executive produced by Denis Leary and Jim Serpico, follows the lives of NYC social workers. Sony Pictures Television and CBS Paramount Network Television are behind the project. (Hollywood Reporter)

Tiffani Thiessen (Beverly Hills 90210) has been cast in USA's drama pilot White Collar opposite Matthew Bomer and Tim DeKay; she'll play Debbie, the "intelligent and supportive" wife of the head of FBI's white collar crime unit (DeKay) who works as an accountant. Elsewhere, Matthew Marsden (Transformers: Revenge of the Fallen) has been cast as the lead in Spike's two-hour backdoor pilot Madso's War from MGM; project follows the Irish mob in Boston; Marsden will play a thief with links to Boston racketeers who tries to leave the game when two of his men are murdered, only to realize that he's next on a hit list. Also cast: Kevin Chapman (Brotherhood). (Hollywood Reporter)

NBC has ordered a full season of crime procedural Life, bumping the sophomore series to a full 22 episode order. (Televisionary)

TV Land has ordered six episodes of hidden-camera reality series Make My Day, based on a successful British Channel 4 format that is being executive produced by Michael Davies (Who Wants to Be a Millionaire?) and Sony Pictures Television. Series follows people who are unknowingly put through a series of strange surprises and coincidences set up by their family and friends. Series is set to launch in 2009. (Variety)

FX has opted not to renew unscripted series 30 Days from executive producer Morgan Spurlock. The series, the last remaining reality title on the cabler, wrapped its third and final season this July. (Broadcasting & Cable)

FremantleMedia has signed a deal with Spike for the worldwide financing, marketing, and distribution of three upcoming series, including Jesse James Is a Dead Man, Deadliest Warrior, and Surviving Disaster, all set to launch in 2009. (Variety)

Anonymous said…
Loved Summer Heights High. I already can't wait for the next episode! Thanks for the recommendation!
11/10/2008