The (Not-So) Distant Future: "Flight of the Conchords" Returns to HBO 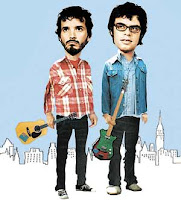 January brings us new beginnings, fresh starts, and the return of some of our favorite television series, sadly off the air for reasons as numerous as the writers strike, truncated seasons, and the vagaries of cable network scheduling.

But in less than two months, we can look forward to the return of such series as Lost, Big Love, Damages, and HBO's inimitably zany comedy Flight of the Conchords.

While I miss each and every one of those dramas something crazy, I have to say that I am just itching with anticipation to catch up with Bret and Jemaine, Murray and Mel, and, well, the music.

Check out the promo for Season Two of Flight of the Conchords, lifting off on January 18th on HBO, after the jump.

Just the sight of Bret firing off that gun like he's in a 1970s cop show makes my heart soar with glee. (I think I've watched the promo now about five times.)

Anonymous said…
Flight of the Conchords! Lost! Big Love! Damages! It certainly will be a happy new year!
11/19/2008

Jo said…
Hiphopopotamus and the Rhymenoceros! I've missed the boys and also look forward to their return.
11/19/2008

Anonymous said…
So excited about FoTC coming back to HBO in a few weeks! I love Bret and Jemaine and can't wait to see what new songs they've written and what trouble they get into this time. LOVED that promo!
11/20/2008