TV on DVD: "Doctor Who: The Complete Fourth Series" 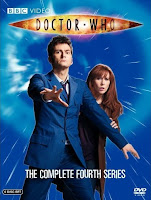 I'll admit it. Initially, I was a little concerned with the idea of comedian Catherine Tate's Donna Noble joining the Doctor for the entirety of the series' fourth season... but Tate's winning performance as spunky and headstrong Donna quickly won me over and, if I'm being honest, I have to say that Donna is perhaps my favorite companion now.

While Tate's turn in Season Three's "The Runaway Bride" pegged Donna as a comedic foil for the Doctor, Season Four quickly gives her some much needed character development and transforms the uppity Cockney girl into a tragic figure of pathos. (If that's not a head-turning surprise, I don't know what is.)

If you missed Doctor Who's superlative fourth season (or want the opportunity to relive it all over again, from "Voyage of the Damned" to "Journey's End), fret not as BBC Video releases Doctor Who: The Complete Fourth Series on DVD today in a glorious six-disc set. (Also available today: the animated Doctor Who feature Doctor Who: The Infinite Quest.)

While each of the seasons of Doctor Who have been fantastic thrill rides, this one in particular feels even more revved up in comparison and nicely ties up four season's worth of storylines in a truly satisfying and gripping way. Perhaps it's the appearance of virtually every supporting player from over the last four seasons--including all three companions from the current series--and the casts of Torchwood and The Sarah Jane Adventures, as well as the return of not one but two ancient enemies and a climax that features self-sacrifice, genocide, and humanity's ability to persevere against all odds.

But it's the dynamic and provocative chemistry between David Tennant and Catherine Tate that really give this taut season its power and heft. Their relationship is completely unlike any between the Doctor and a companion that we've seen on this series to date.

Unlike Rose and Martha, who clearly had feelings for the Doctor, Donna and the Doctor seem more like rough and tumble equals or sparring siblings than they do would-be lovers. Given the climax's intriguing storyline that has Donna saving the life of the Doctor through heretofore unseen means, one can't help but feel that these two vastly different people are in fact birds of a feather. Which makes Donna's ultimate fate that much more heartbreaking.

Doctor Who: The Complete Fourth Series has a suggested retail price of $99.98 but you can pick up a copy for $64.99 right now in the Televisionary Shop.

Anonymous said…
Like you, I was very concerned about Catherine Tate being the Doctor's companion for an entire season but, as Donna Noble, Tate completely blew me away. Her performance was an absolute joy to watch and she definitely brought something new and exciting to the world of Doctor Who.
11/18/2008

Anonymous said…
Not to take away from DVD sales since there's a lot of extras, but I'm pretty sure this season is currently being aired on BBC America, as well.

I have to admit, I, too, ended up liking Donna a lot more than I expected to. The character really matured from the first time we saw her in Runaway Bride and wasn't as shrill and squawky. I had some trouble with the constant telegraphing of "there's more to you than meets the eye" and it seemed rushed at the end, but overall, I did enjoy that season a lot more than I thought I would.
11/18/2008